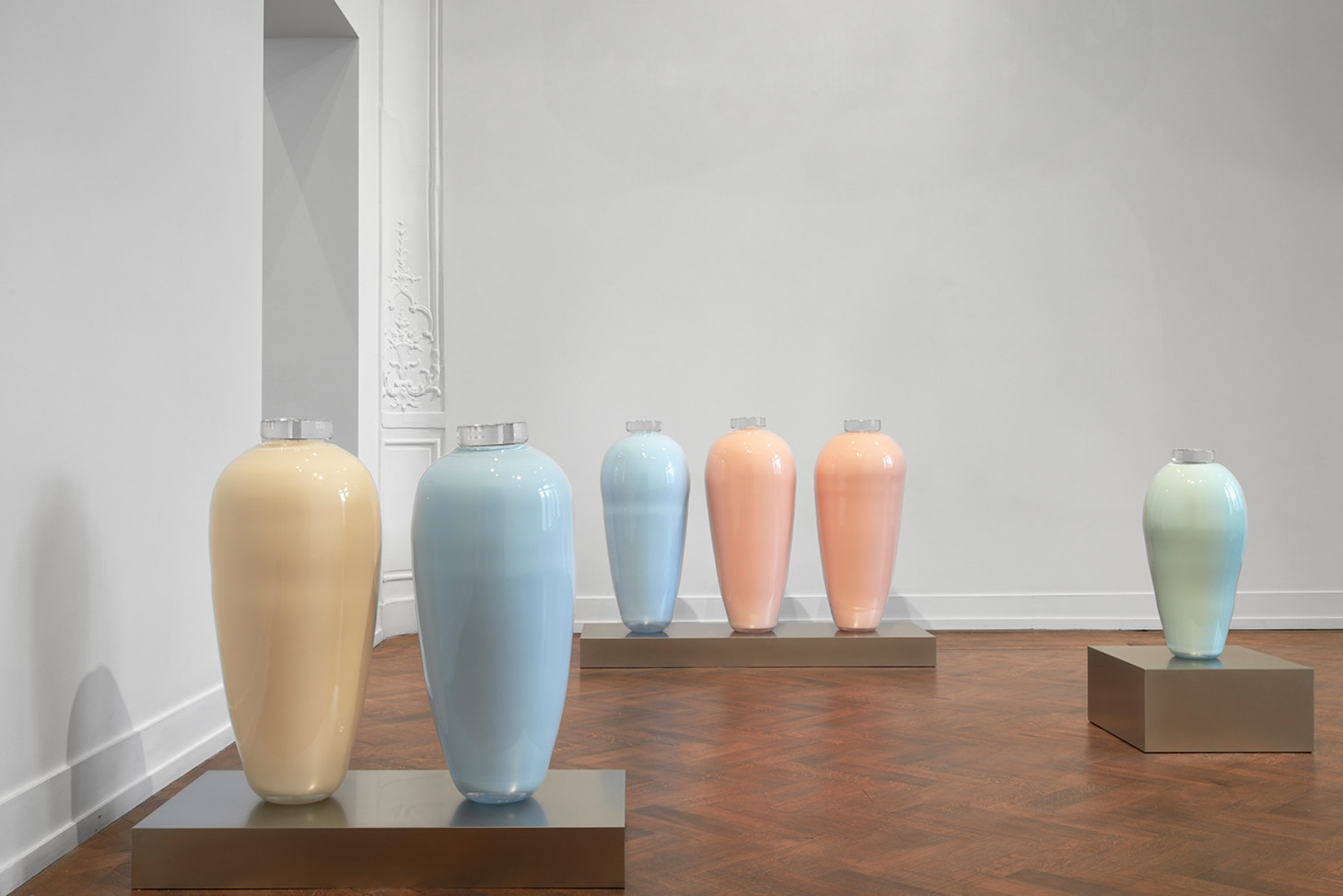 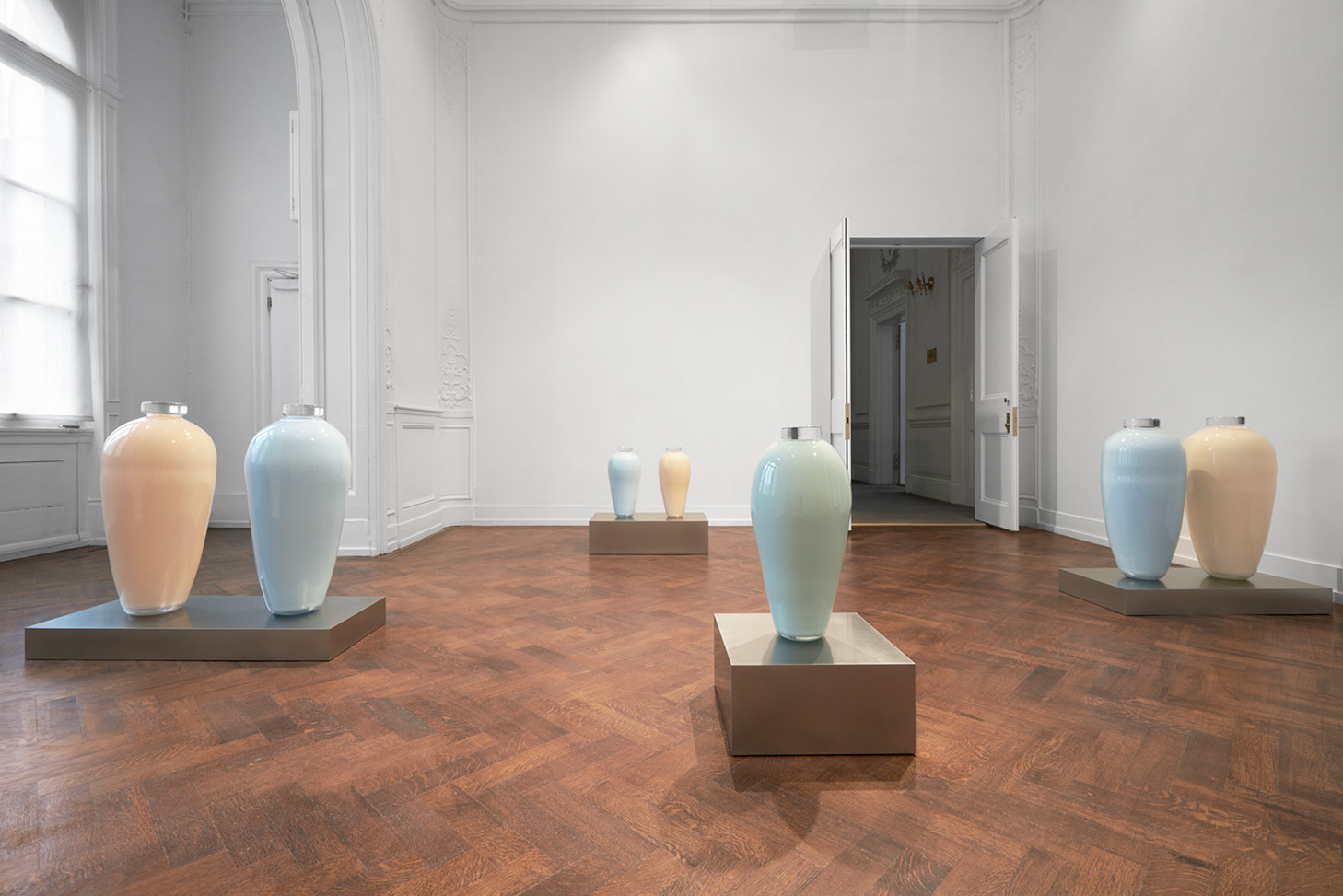 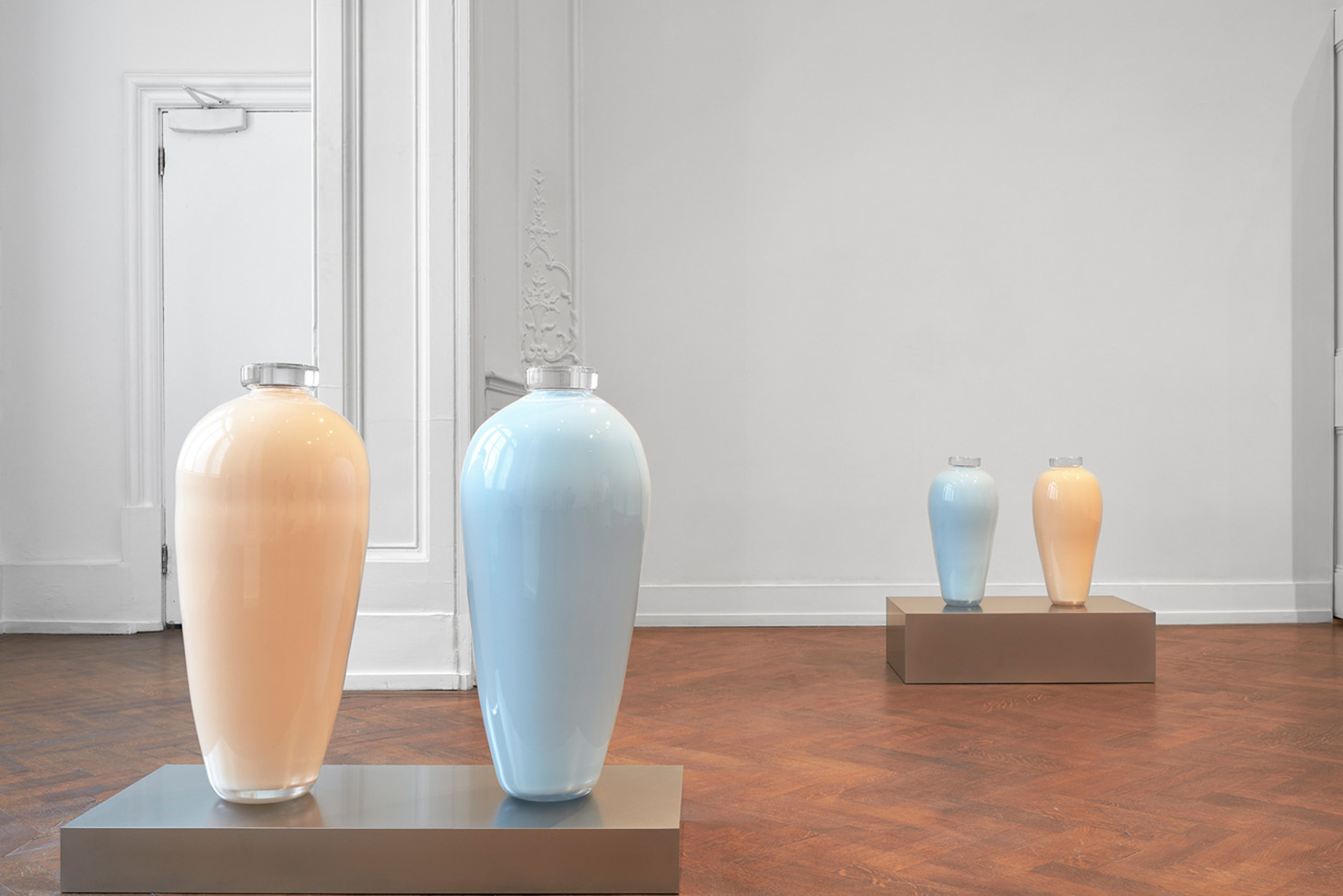 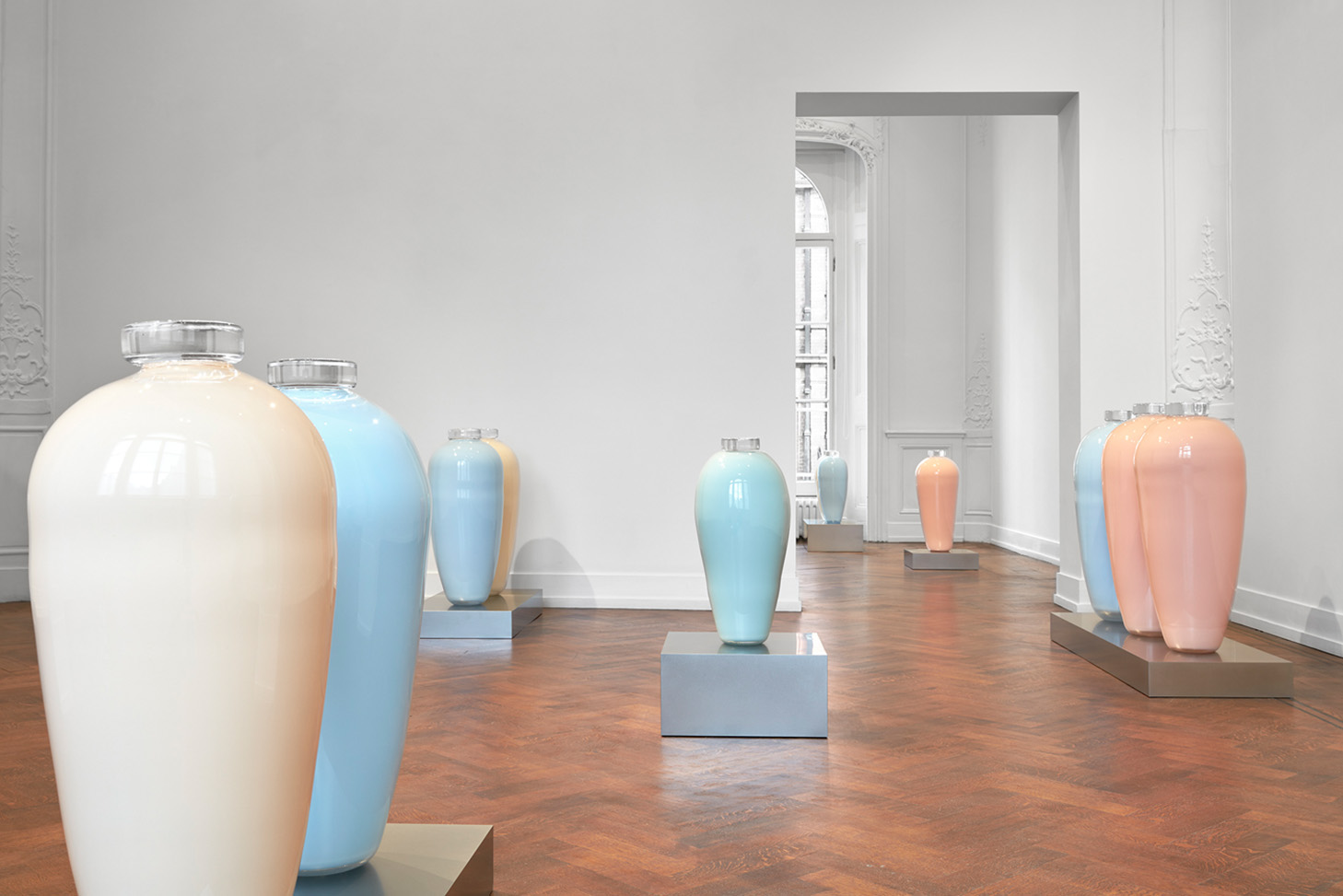 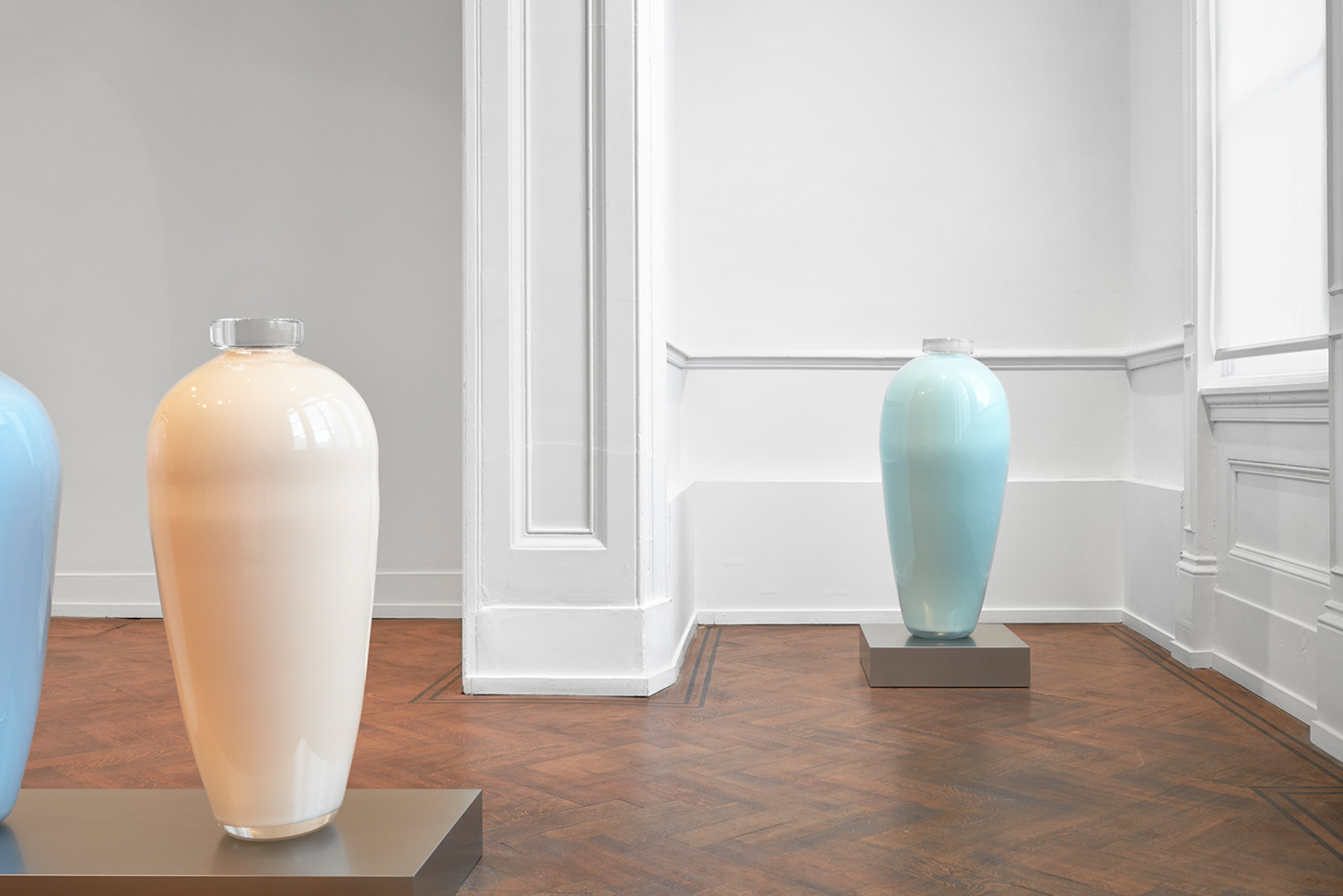 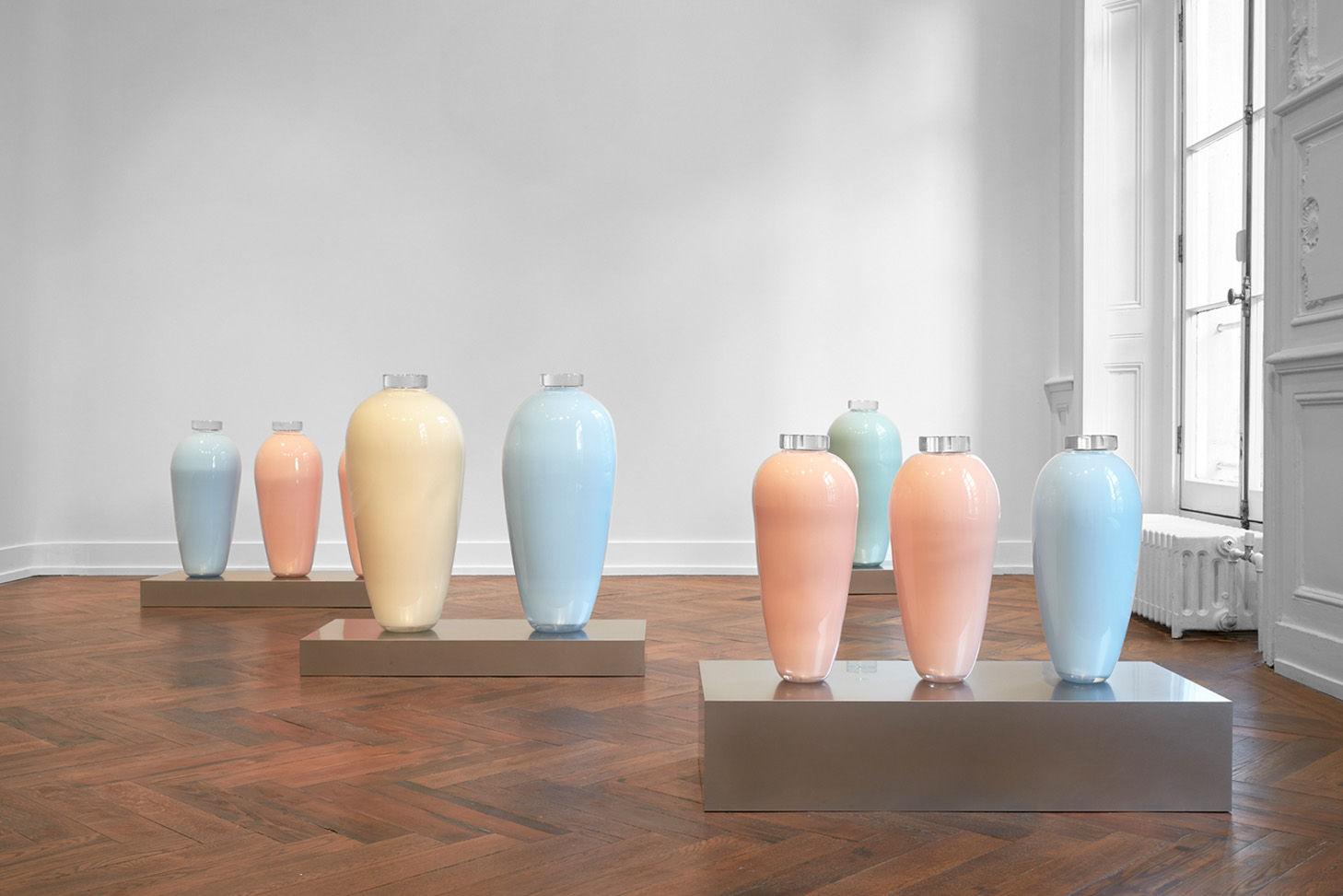 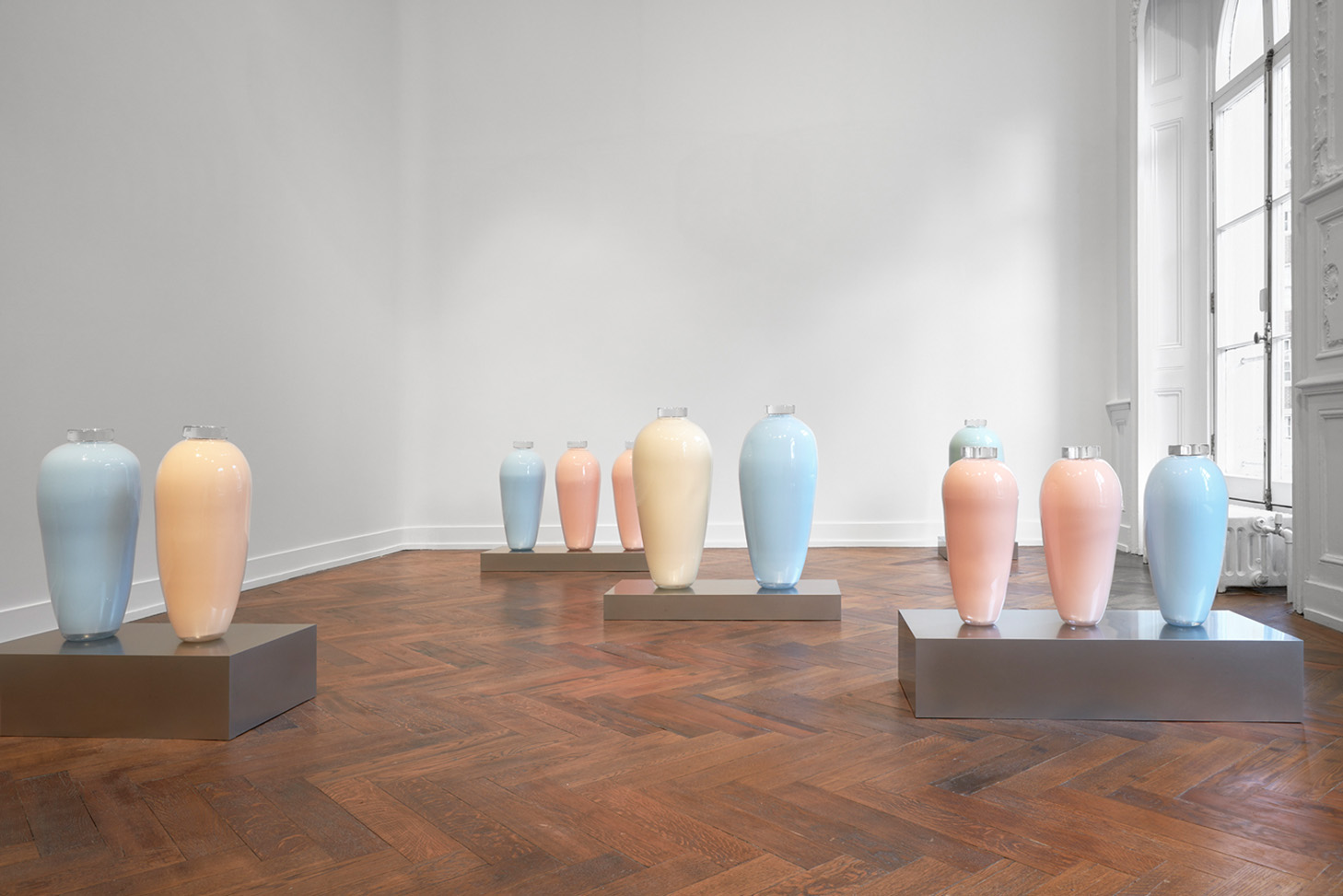 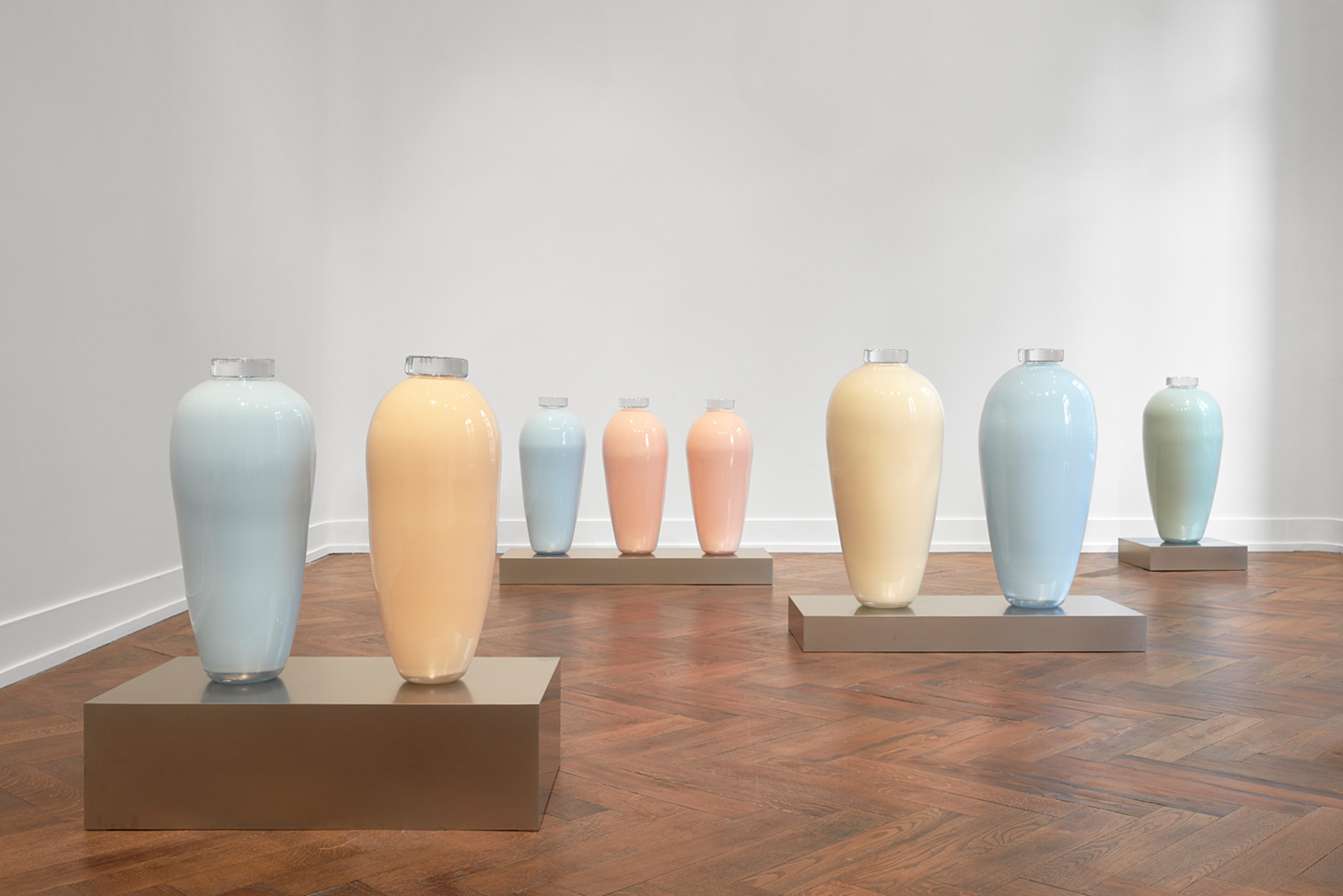 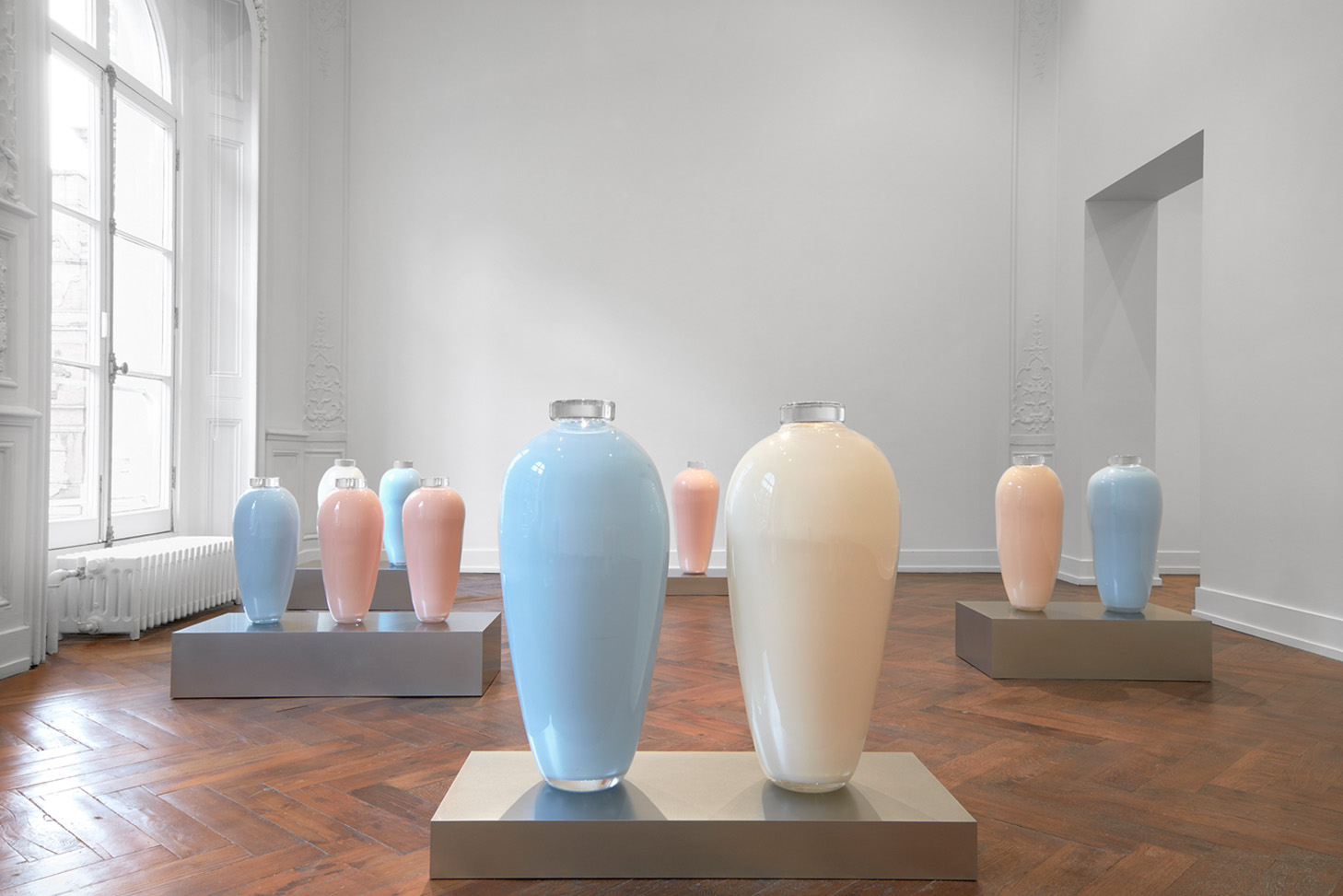 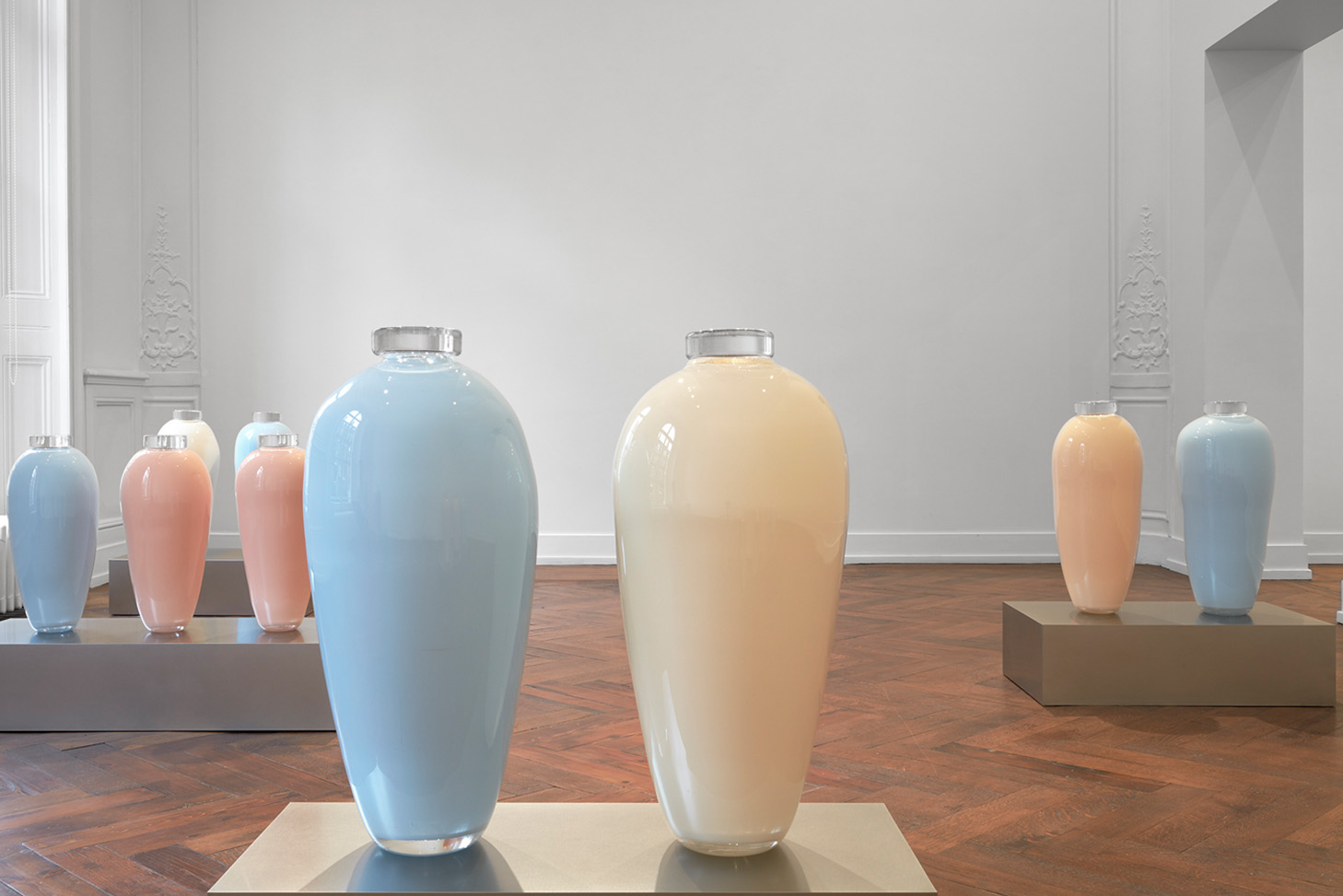 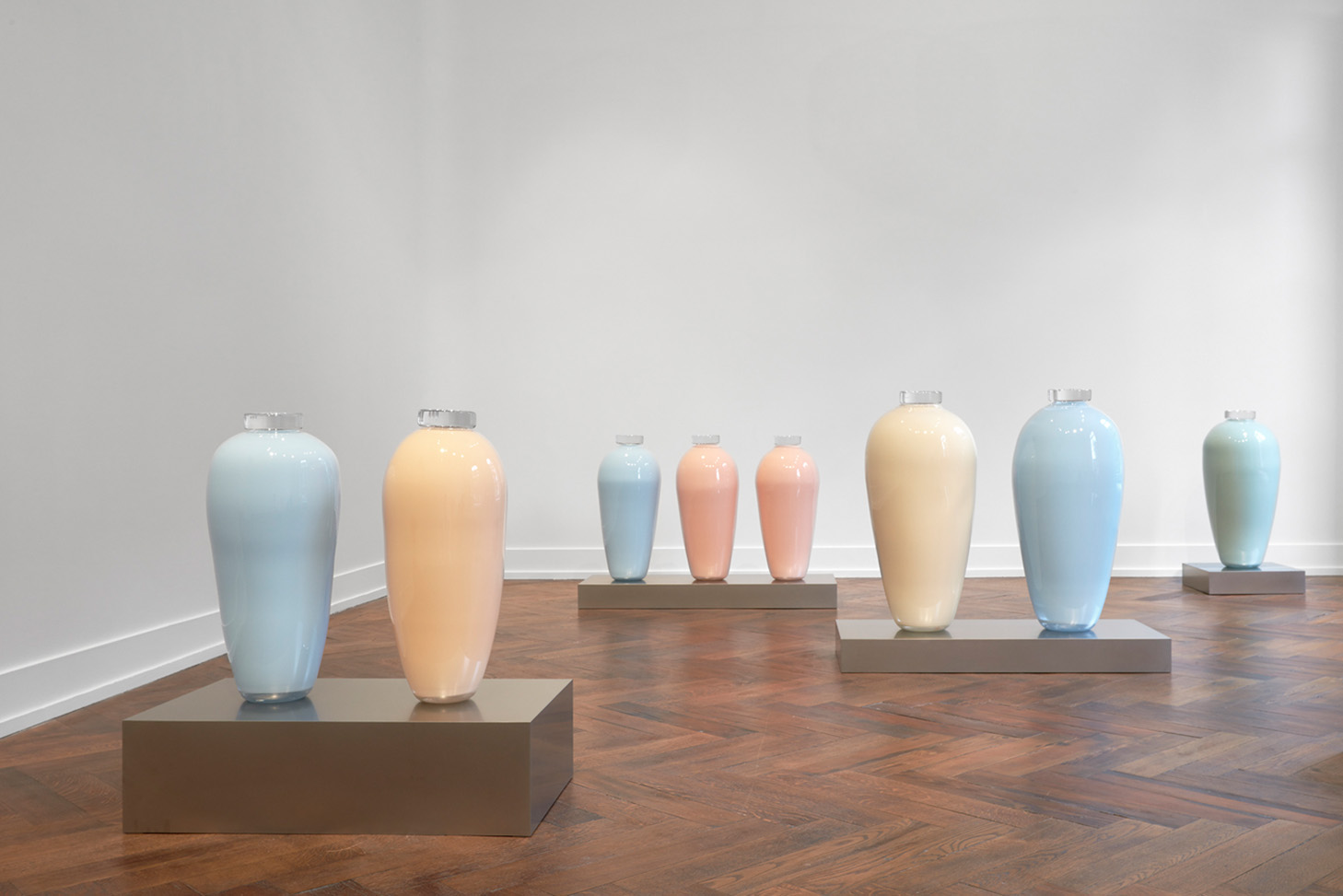 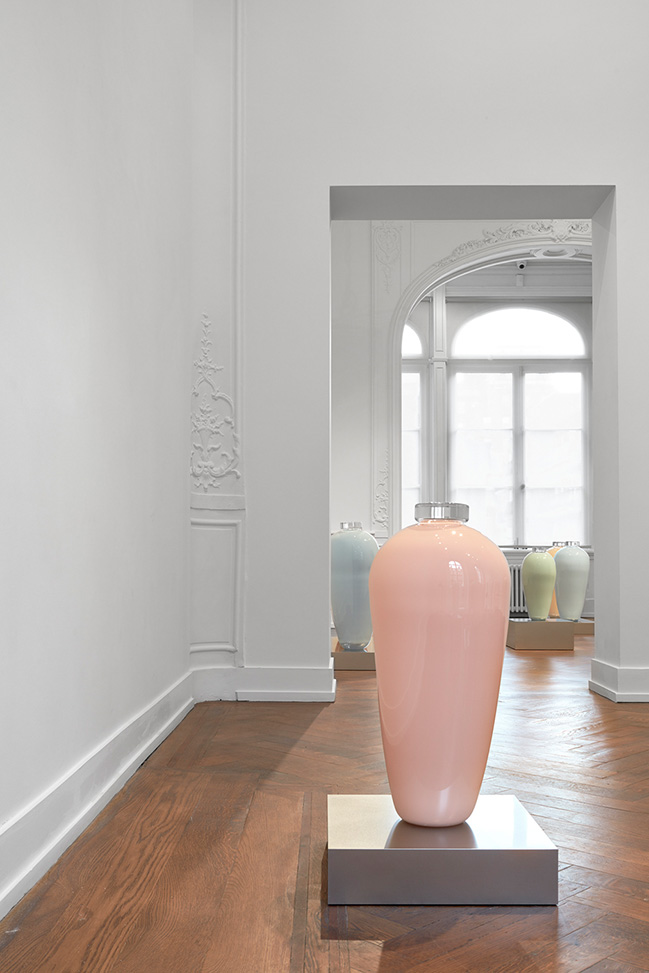 Massimo De Carlo gallery is pleased to present Stigma, Elmgreen & Dragset’s third solo exhibition in the gallery, on view from May 3rd through June 27th in Milan. The exhibition features a new series of works titled Side Effects – a number of custom-made glass vases displayed throughout the main gallery space. The uniform shape of these hand blown vases recalls that of an urn, yet here they are slightly slimmer, sleeker and oversized, ranging from 50 to 90 cm in height. Each vase is filled with the actual pigments used to coat pills in the latest generation of HIV medicines, such as Truvada, Atripla, Stribild and Isentress. The pastel color pigments – peach, pink, mint green and light blue – evoke a sense of innocence and put forth an outwardly harmless façade, an attractive, almost candy-like appearance that contradicts the toxic reality of these medications.

Employing and at the same time subverting the tenets of minimalism, Side Effects can be seen in a historical context of works by artists such as Roni Horn or Félix González-Torres, or as an updated version of the artist group General Idea’s PLA©EBO from 1991. However, today HIV is no longer considered a fatal disease and with new medicines, patients can count on a close to normal life expectancy, though often burdened with various side effects. In spite of the record high numbers of newly infected young people in recent years, the media and governments seem to have lost their interest in the subject matter now that HIV is no longer a sensational topic. Elmgreen & Dragset’s vases stand in groups of one, two or three, according to the daily prescribed pill dosage and combination of each medicine. They are displayed on low, clinical looking plinths made in stainless steel, reminiscent of the sterile interior of a laboratory as well as of Donald Judd’s aesthetics.

In the gallery’s adjacent room, Elmgreen & Dragset guide the audience into a more intimate ambience that contrasts with the previous hall, presenting a single sculptural work entitled TRACES, a lone streamer hanging from a switched on wall lamp, as though left behind after a party. The pastel colors of the metal cast streamer are similar to those of the pigments in the Side Effects series.

During the 1990s, AIDS was a much-debated subject in the work of prominent visual artists, but today it appears less frequently in the context of contemporary art. With Stigma, Elmgreen & Dragset again refer to the illness, but now at a time when treatment has become more manageable due to the new medicines available on the market. The title Stigma underlines the societal consequences and lingering prejudices that still continue to surround the disease.