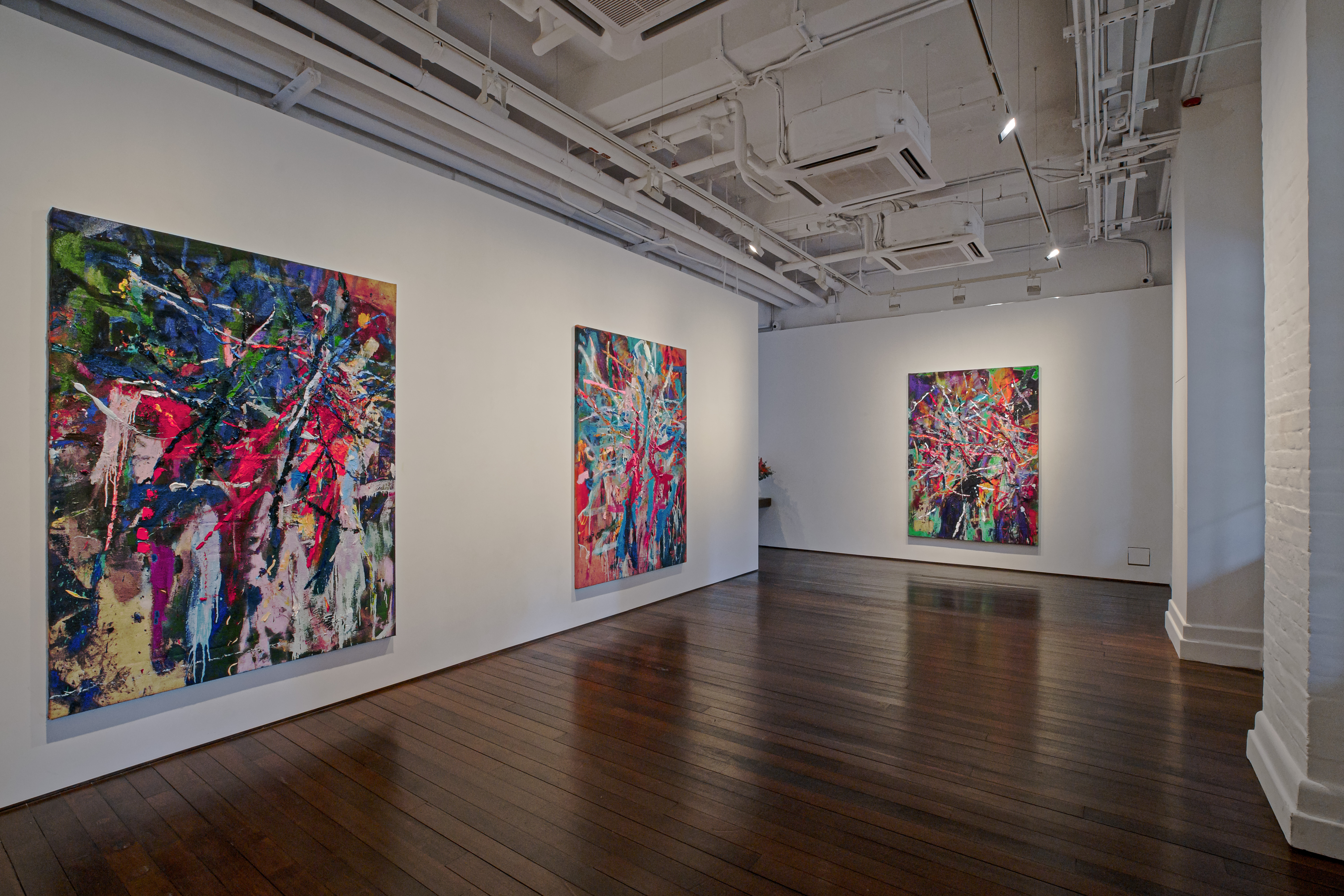 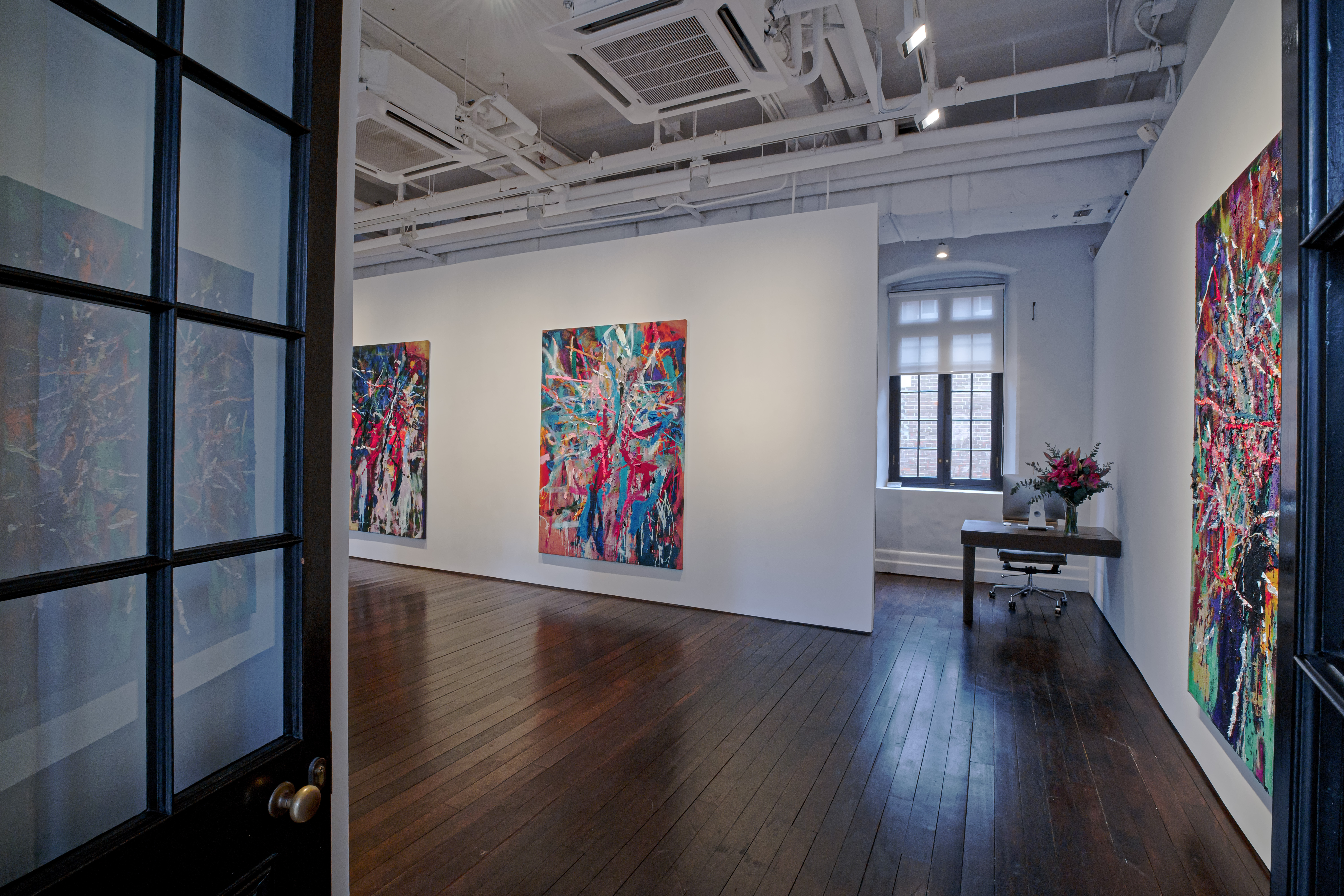 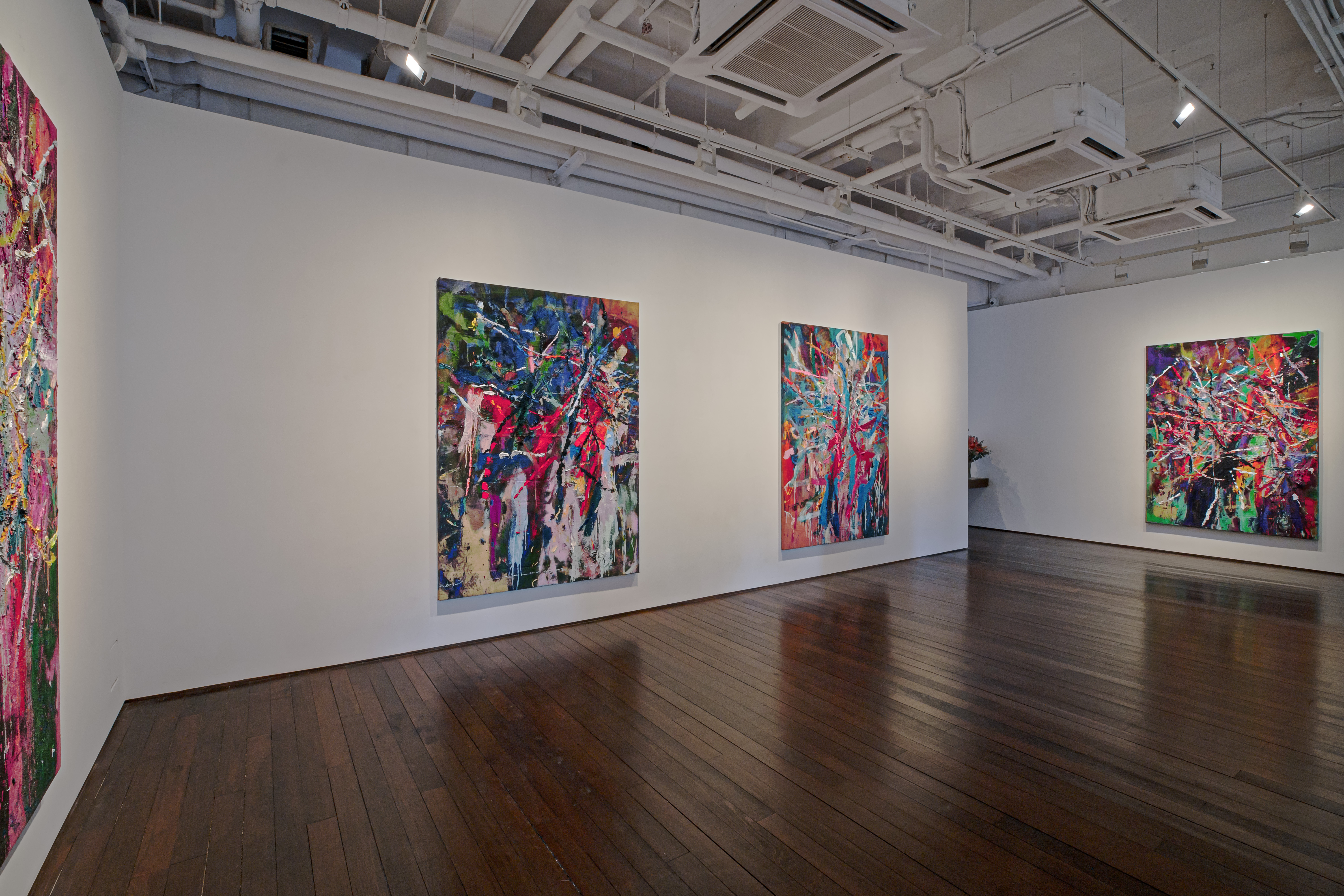 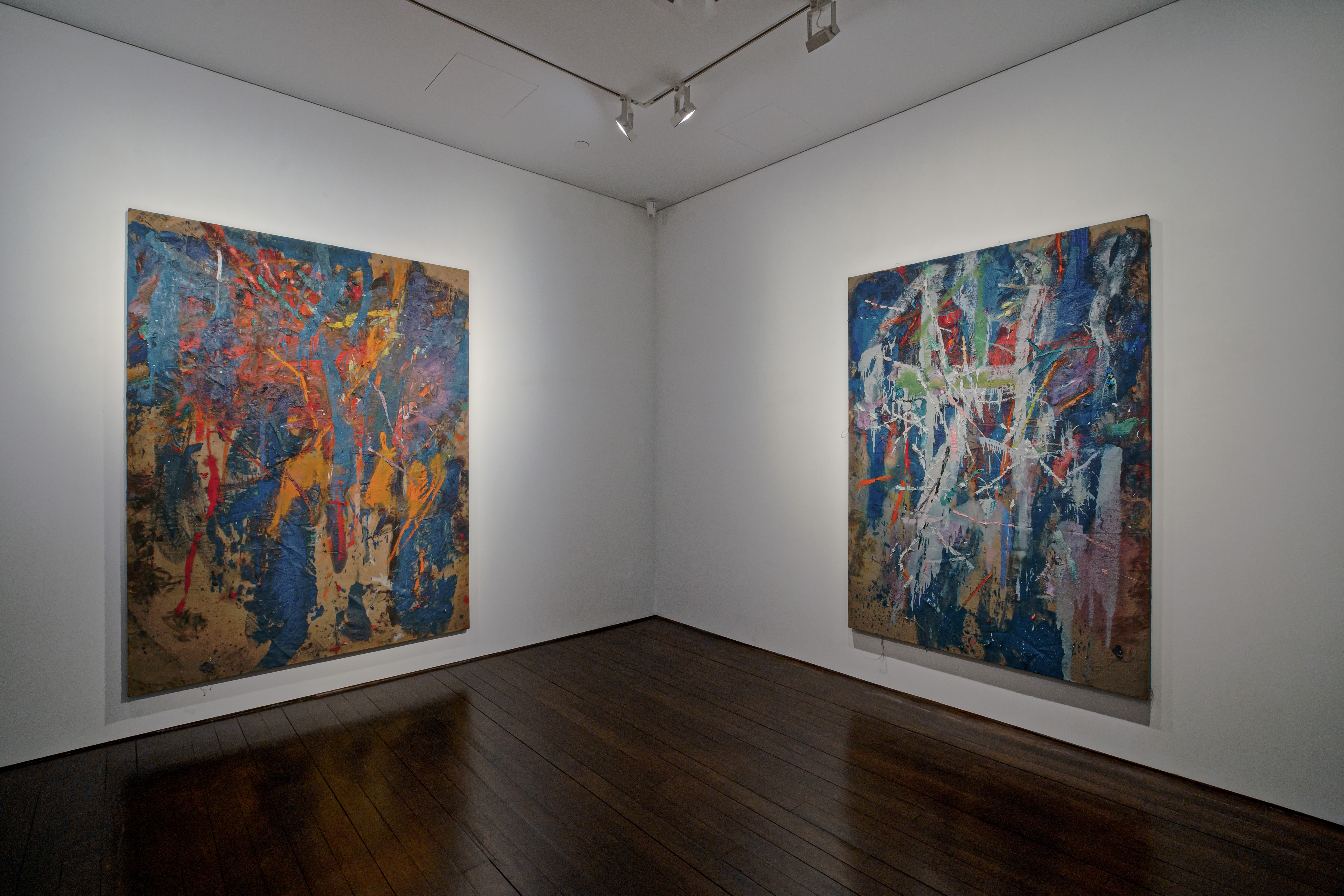 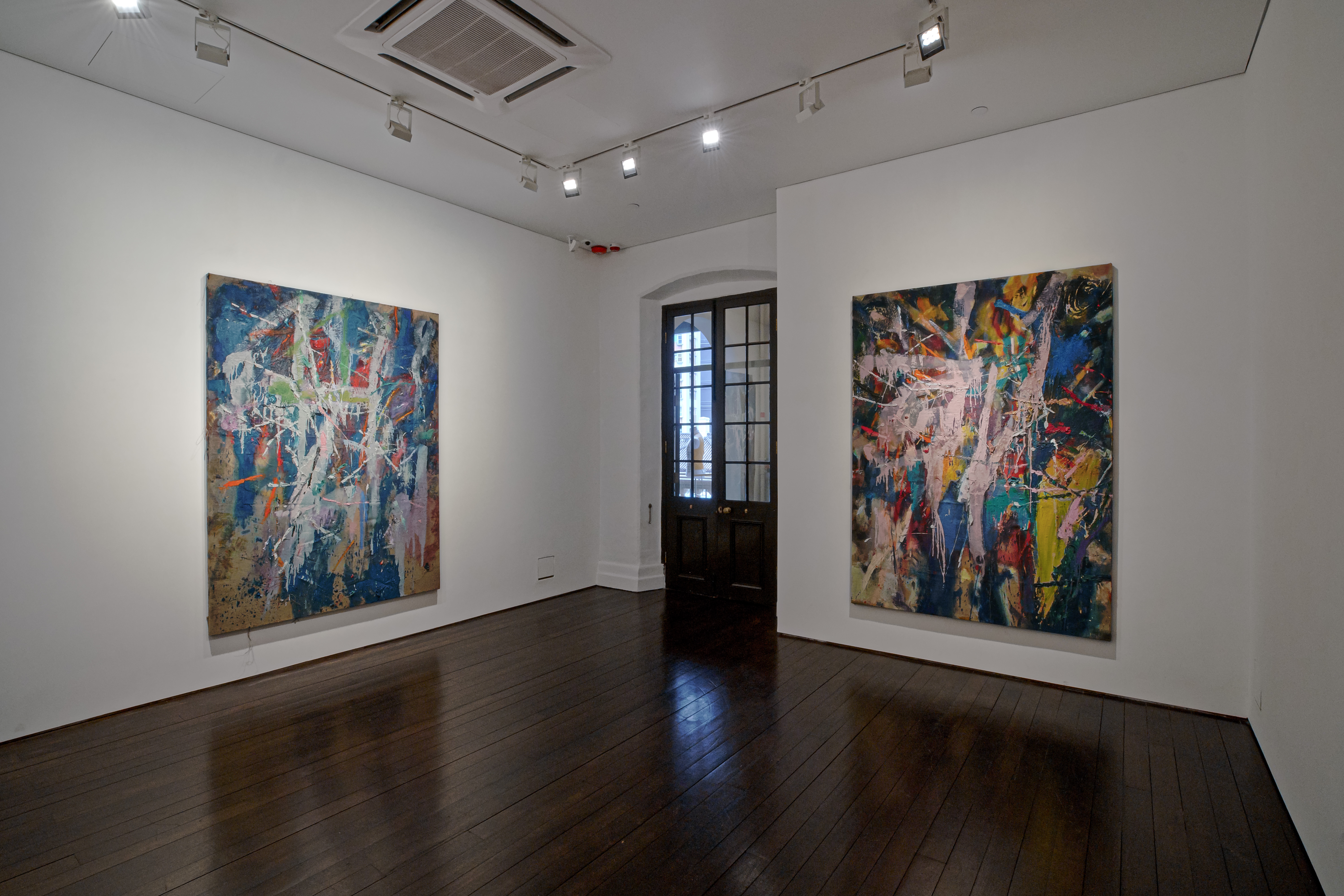 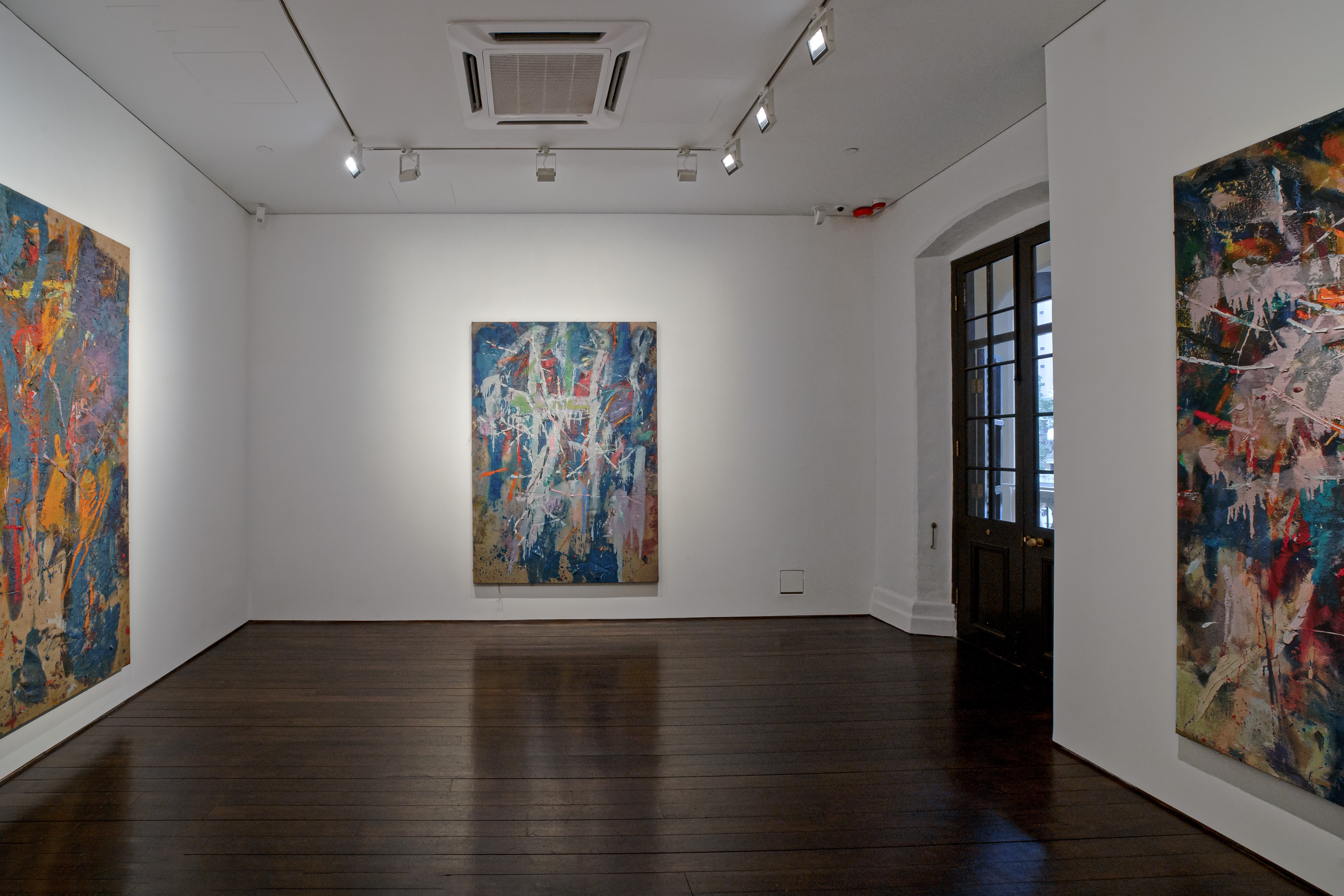 “Like sending my love”, said Spencer Lewis when we asked him what he meant by the exhibition’s title. Lewis sends us a message or, rather, a feeling. Smears, caked-up textures and bursts of colour can be read or interpreted as words, parts of a message on the brink of legibility.

Pouring himself on the fuzzy skin of his jute canvases, Lewis draws lines and marks, spraying and splashing paint on a surface that absorbs everything and resists erasure. With chaotic, almost infinite layers, Lewis's canvases conceal and simultaneously unveil a brushstroke, a gesture over the other, stories and moments culminating and accumulating on the painting’s densest parts.

Lewis’s use of cheap materials reveals an urgency in his practice and wilful attention towards mediums that do not carry the burden of an art historical heritage. Painting on unprimed jute exposes the artist’s instinctual and unruly pictorial language, exhibiting a distressing authenticity and blatant selfhood. Aggressive, bright hues blend in with the earthy tones of the jute, creating crusty patches of colour that hide and store previous signs and brushstrokes. Trapping time and stories, these matted and thick layers of paint are intermitted by empty spaces where the brown-tan jute displays its roughness and the artist’s deliberate disregard to finish.

Despite the apparent unpredictability of Lewis’s compositions, they are based on a methodology and structure. Lewis is, in fact, interested in pictorial organisation and image-making. Consistently concentrating towards the centre of the canvas, Lewis’s brushstrokes frantically tell the different layers of the same narrative. Splashes of white, pink and orange are the first words that the artist is letting his viewer read as a preamble to a story made up of many moments and scenarios. Descriptive marks and eloquent signs build up on the jute to create a history on the verge of legibility.

These muscular gestural abstractions exude a sense of violence – one that wants to be tamed and, at the same time, freed unfiltered on the canvas. “Part of being human is engaging with violence,” says Lewis. The artist portrays a universal feeling and behaviour that characterises the state of humanity, as the artist explains, “it would be weird to ignore it”.

This brutality is rendered through wild and fierce brushstrokes but also through a performative act. Lewis drags the jute on the floor and throws it around in the studio space, assaulting his canvases while embracing this sense of violence – a momentary synergy of creation and destruction.

This new series of works presented at MASSIMODECARLO Hong Kong exposes human brutality and a universal, familiar feeling of violence that the artist fully embraces and satiates. Each one of Lewis’s paintings is an act of love towards the self and the multitude, a cryptic visual message of self-acceptance and reassurance. 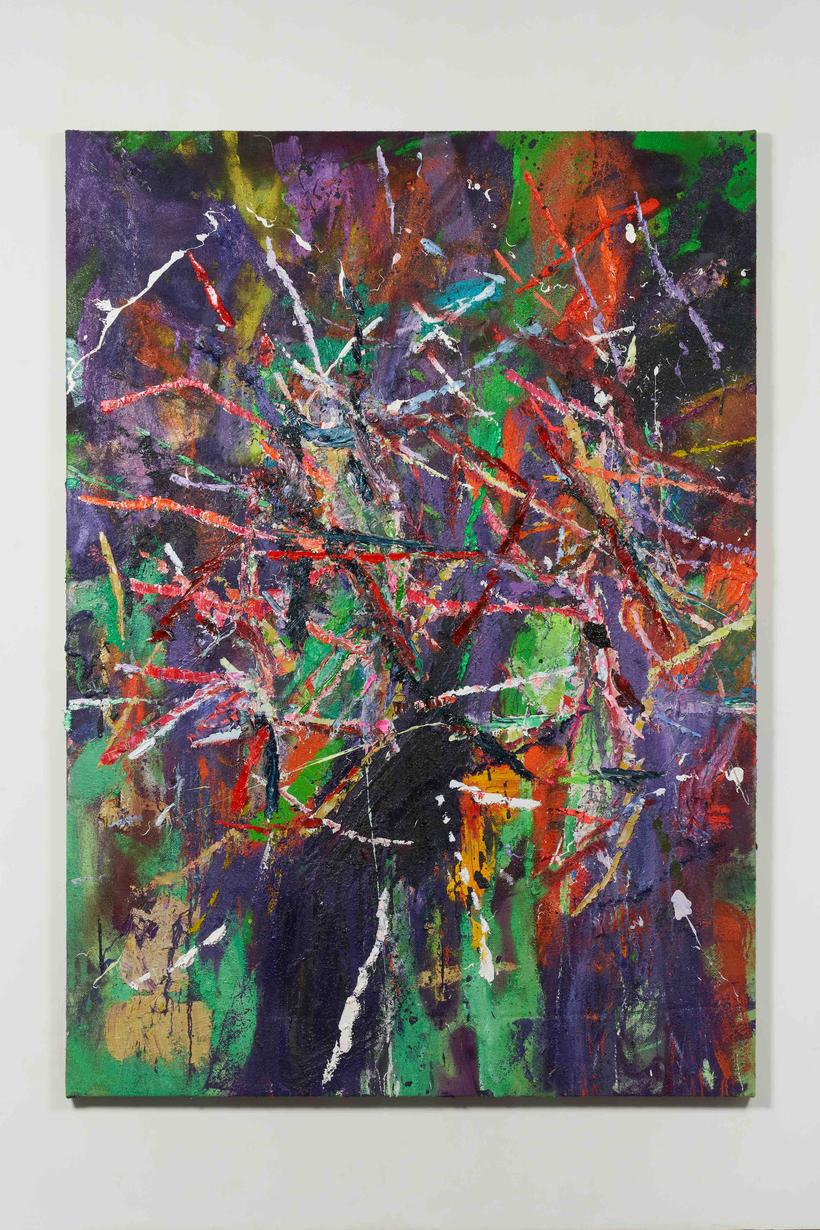 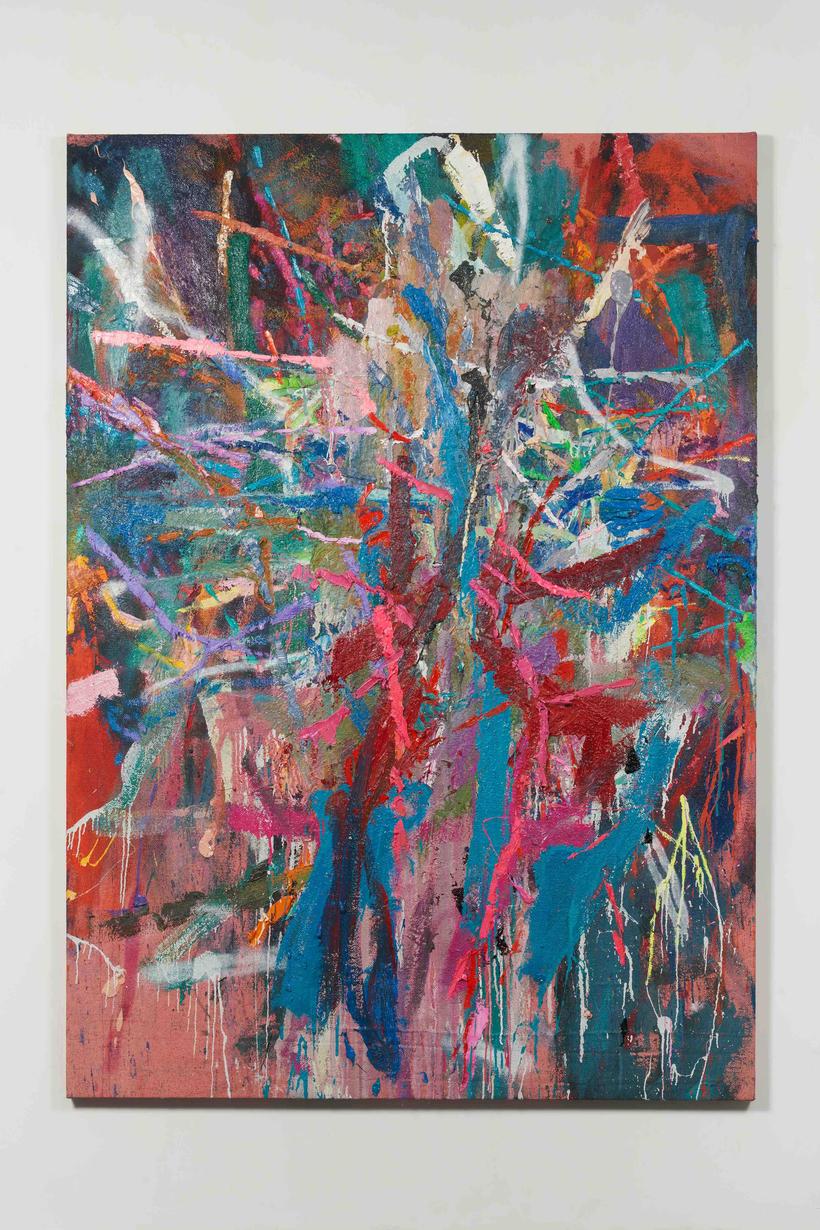 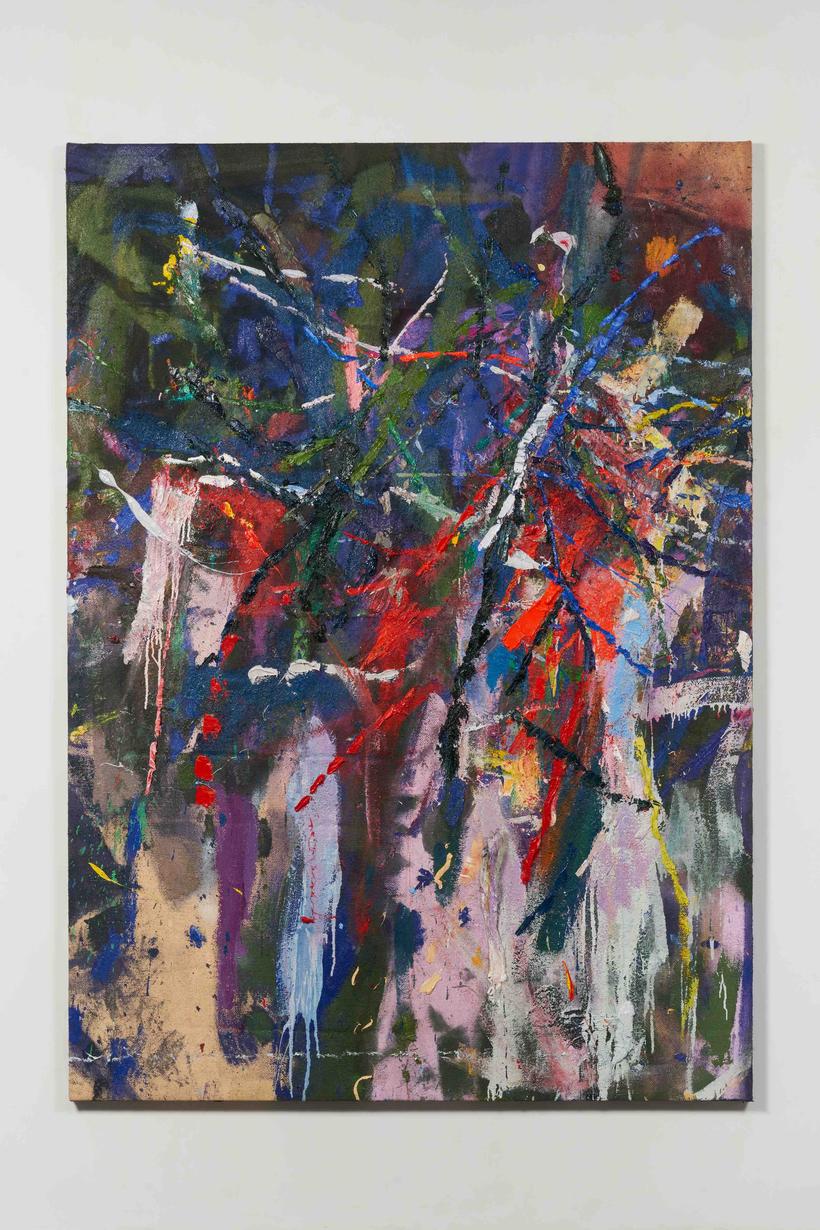 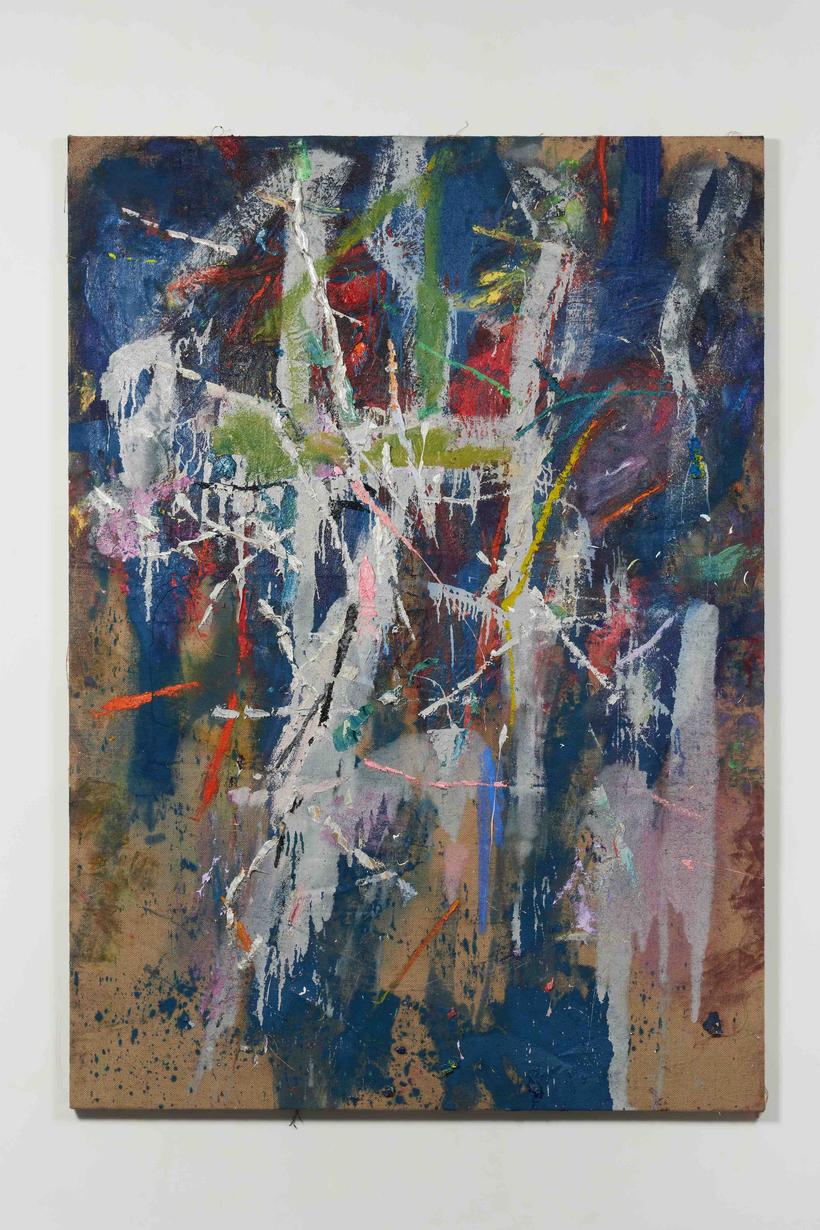 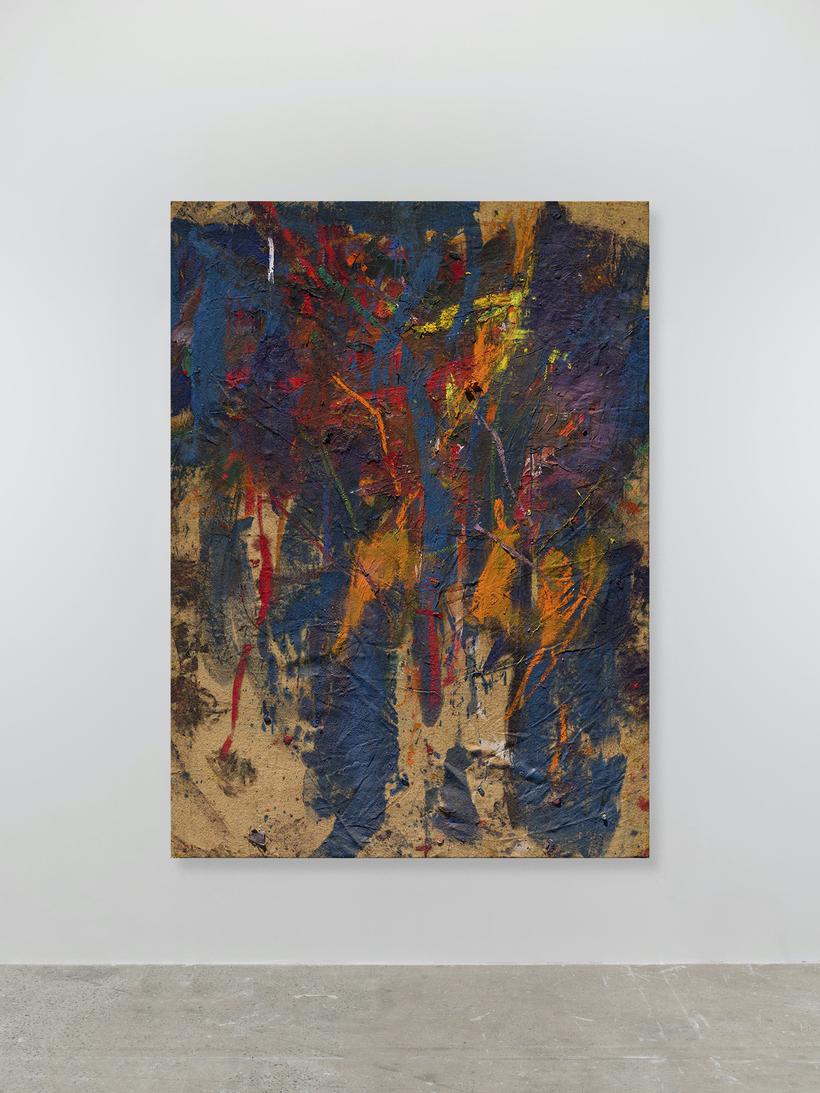 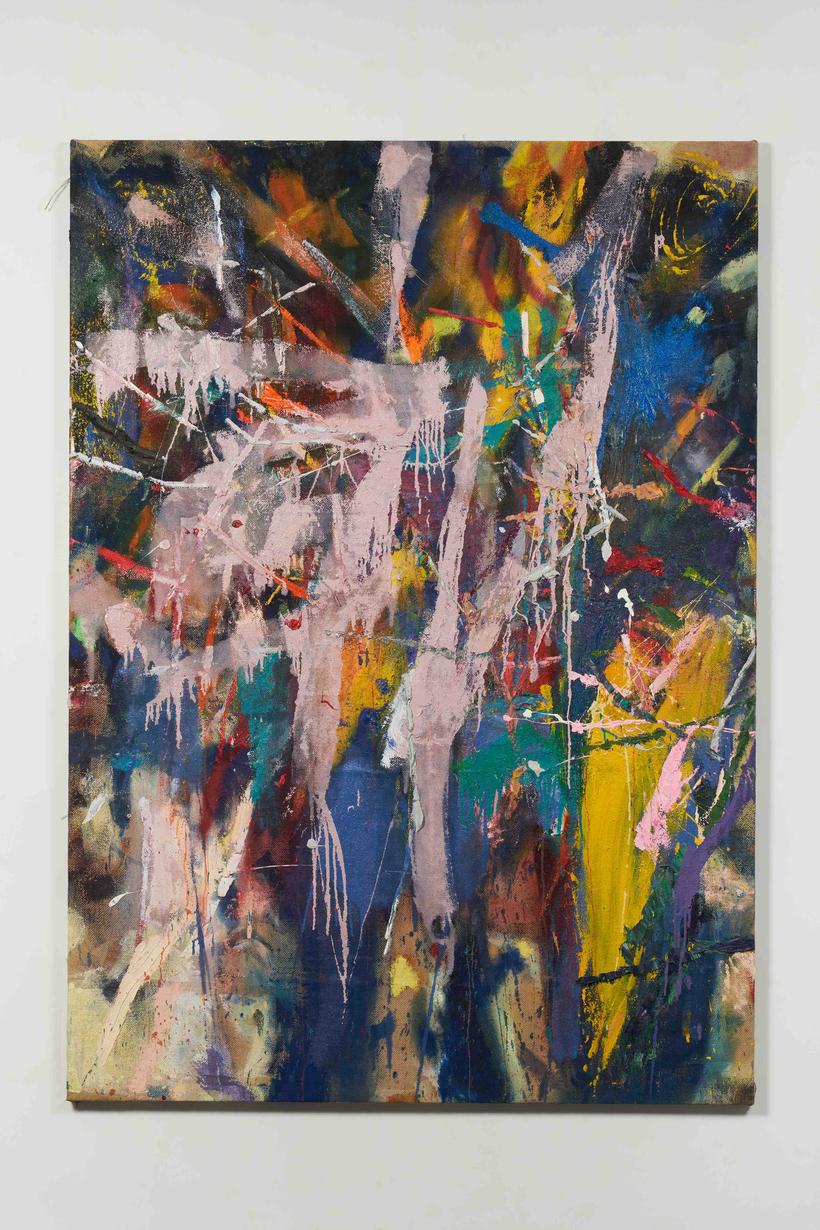