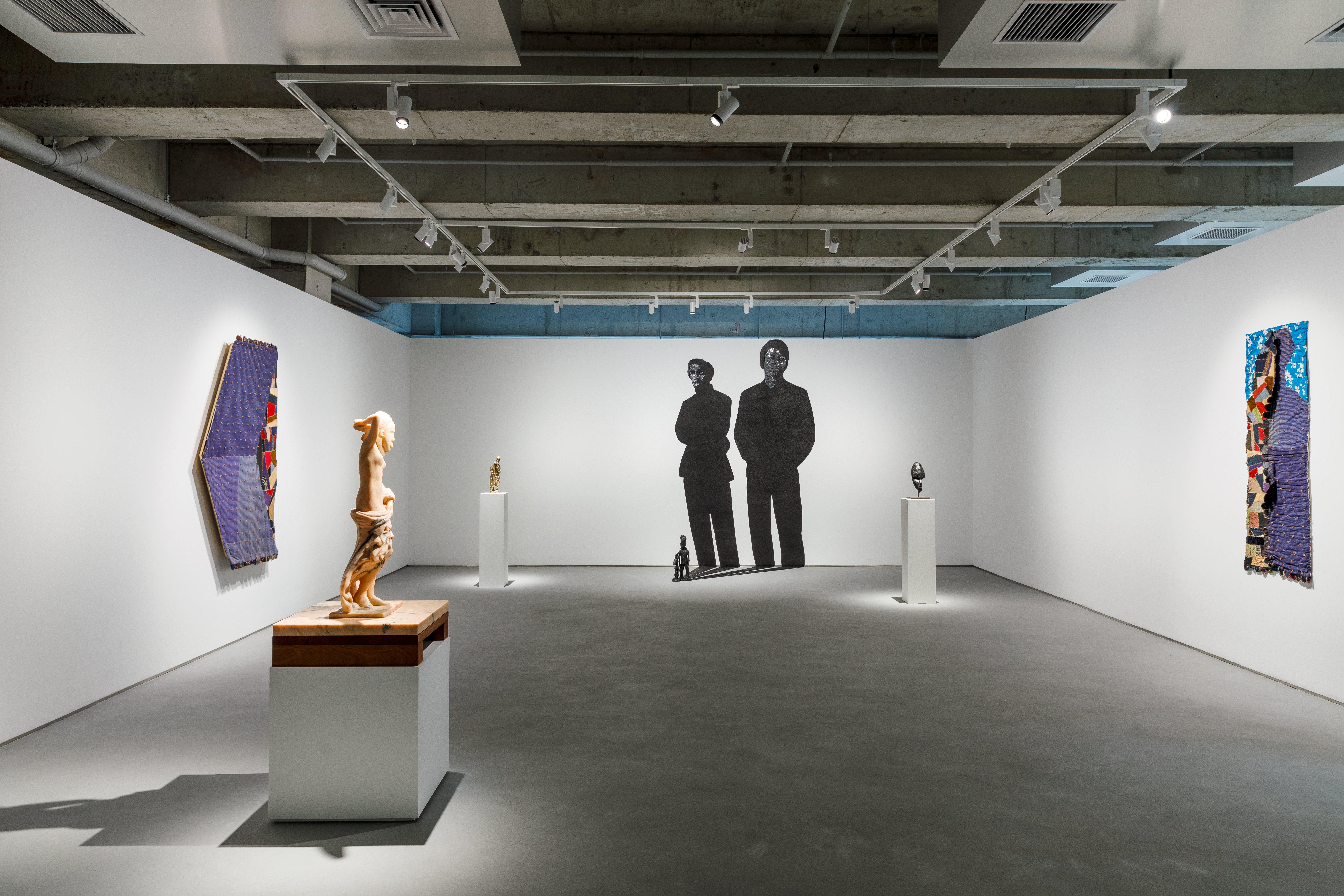 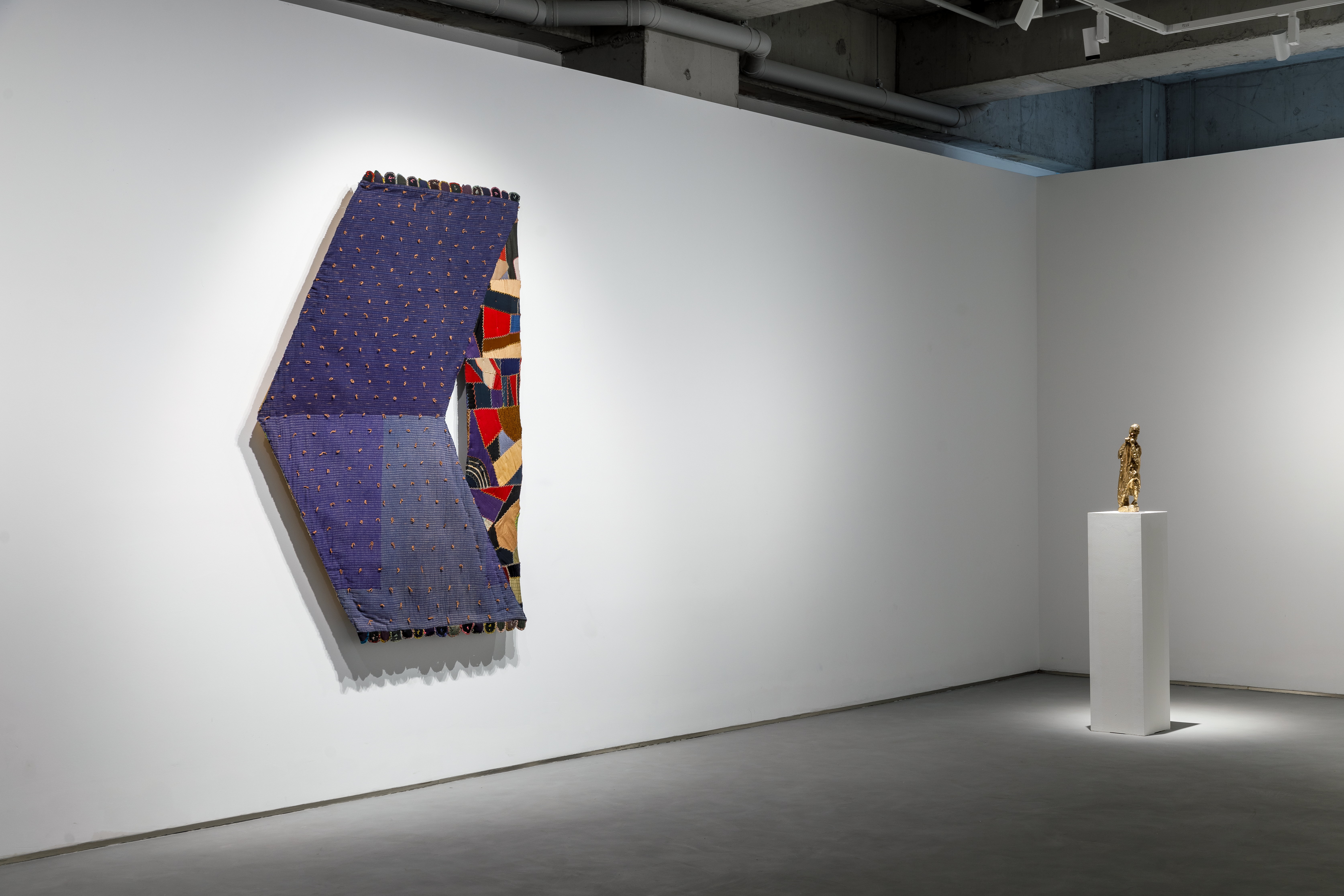 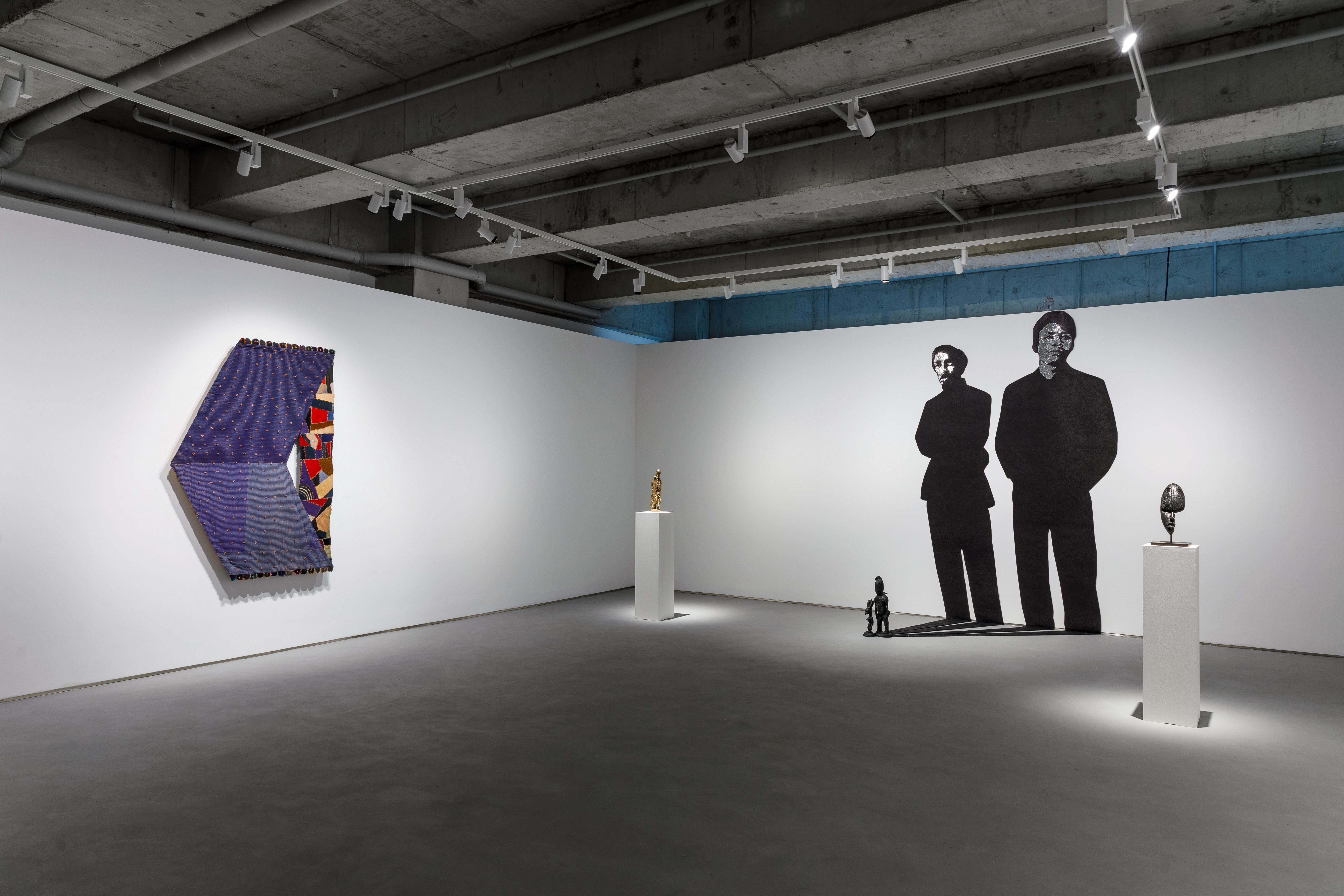 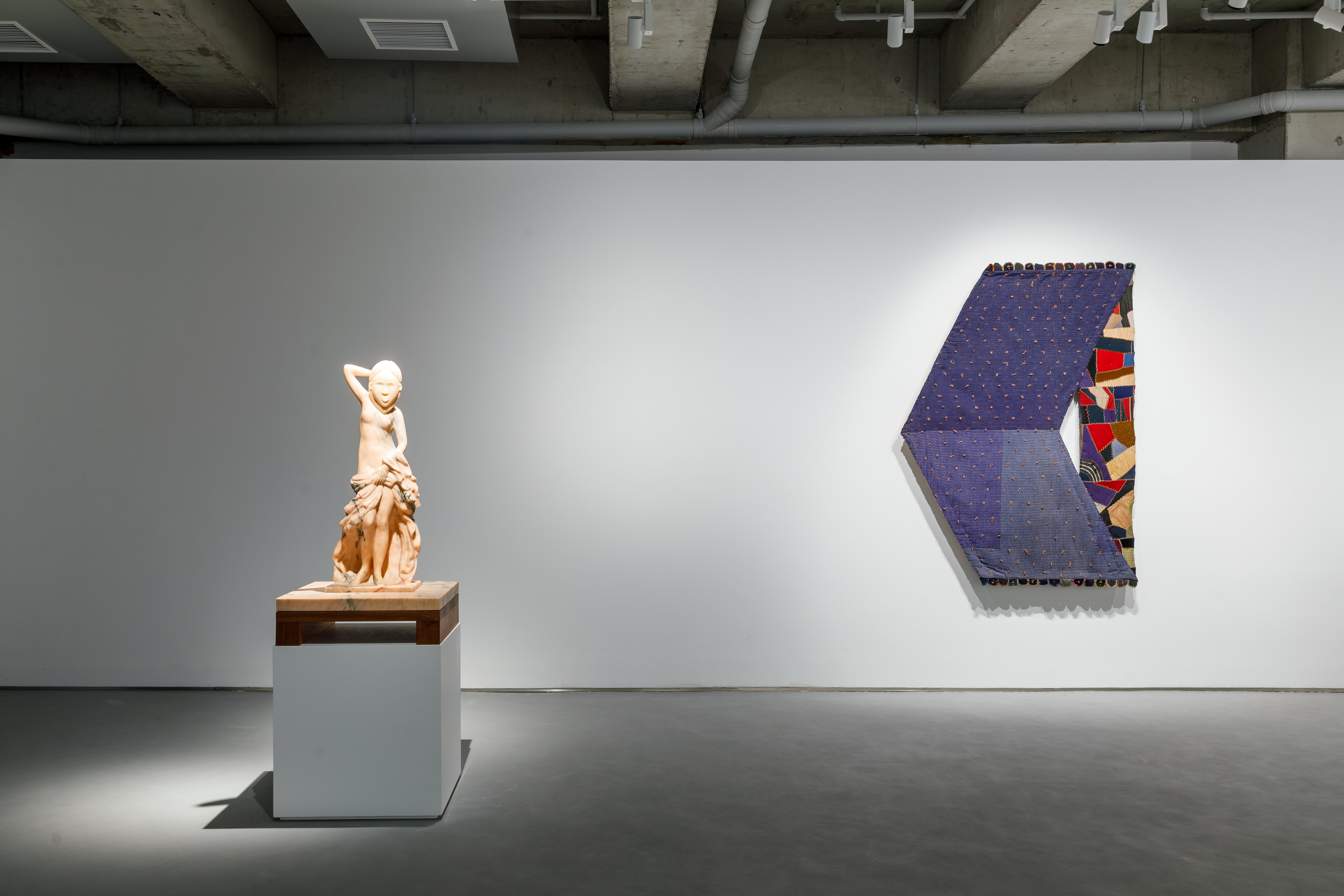 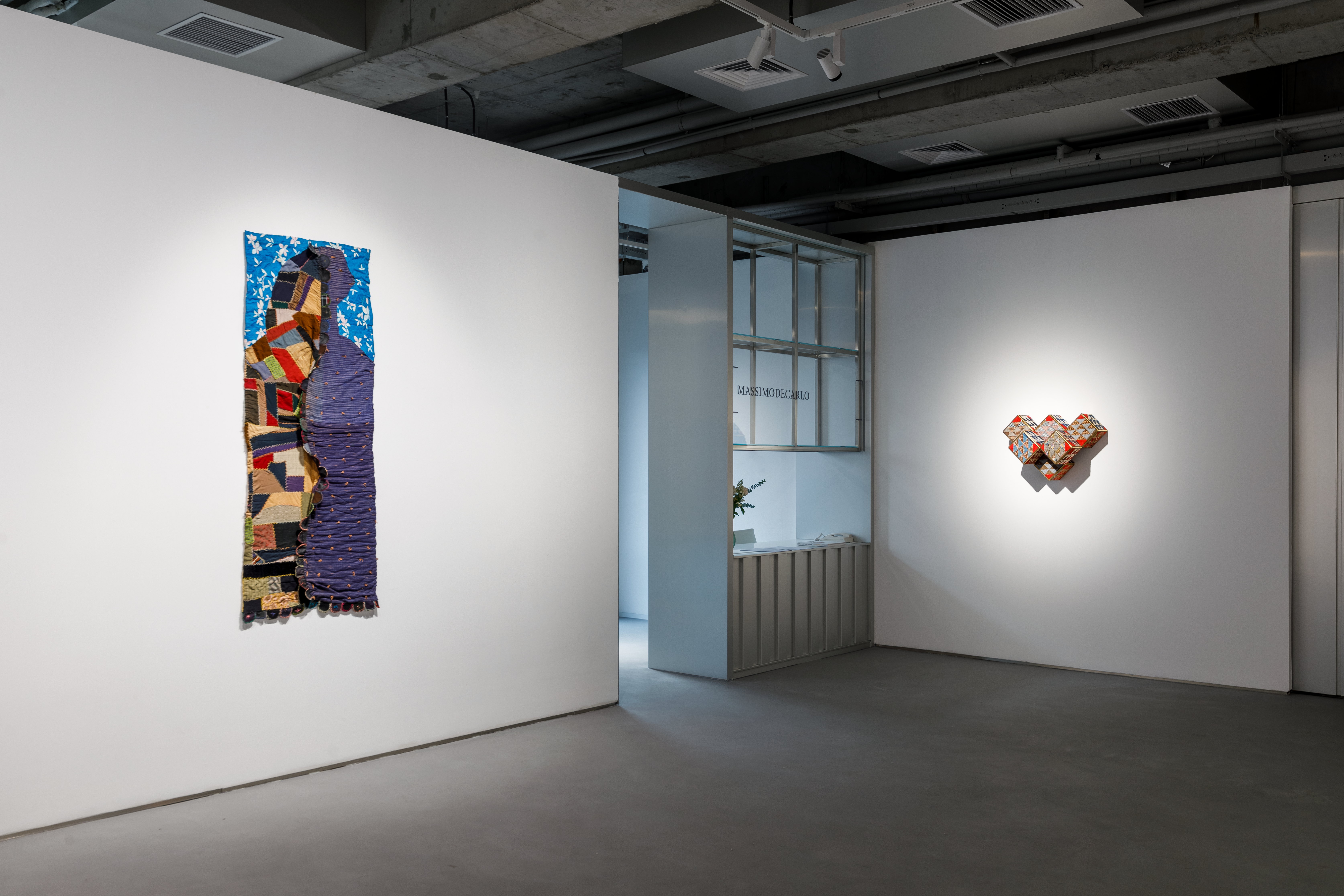 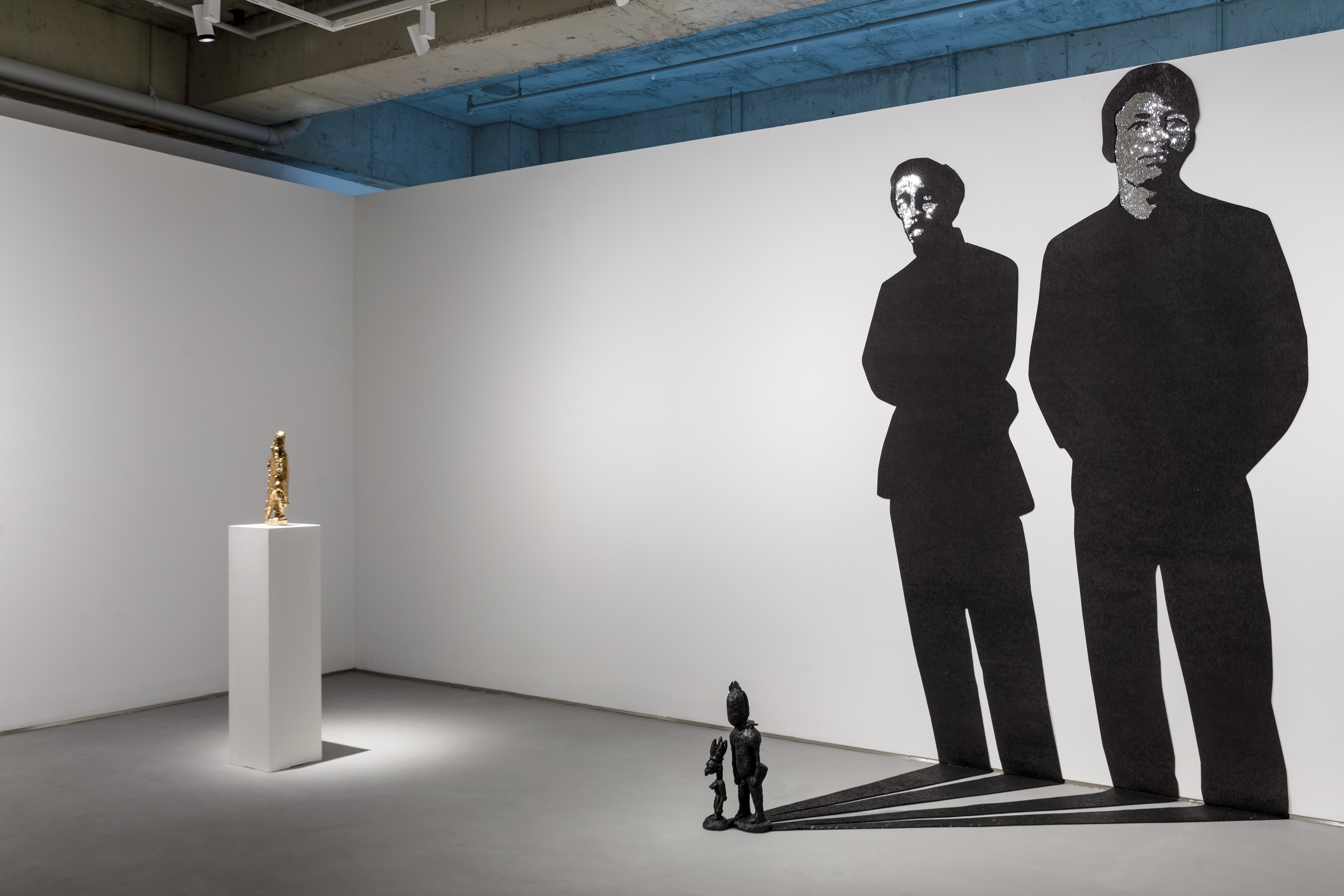 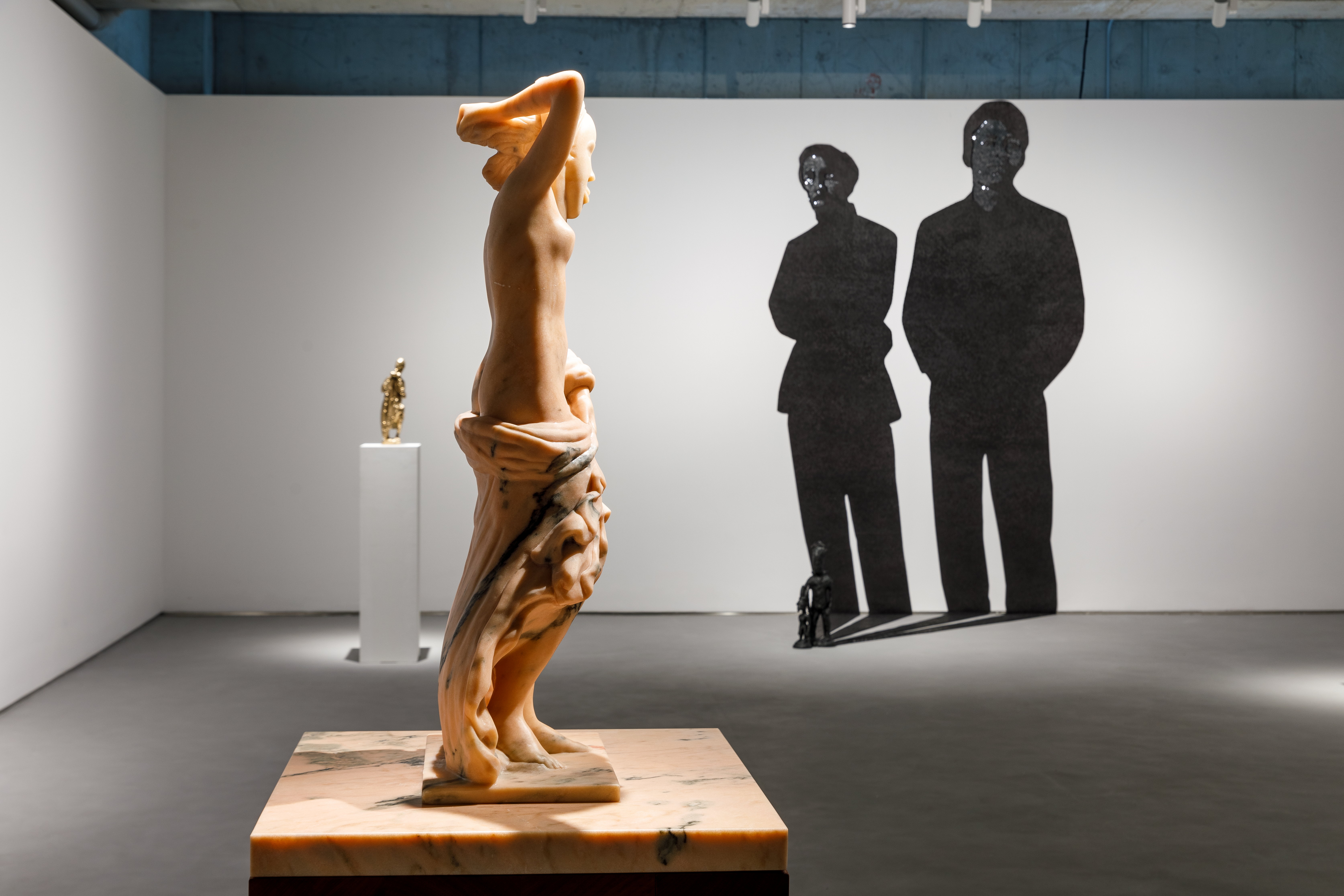 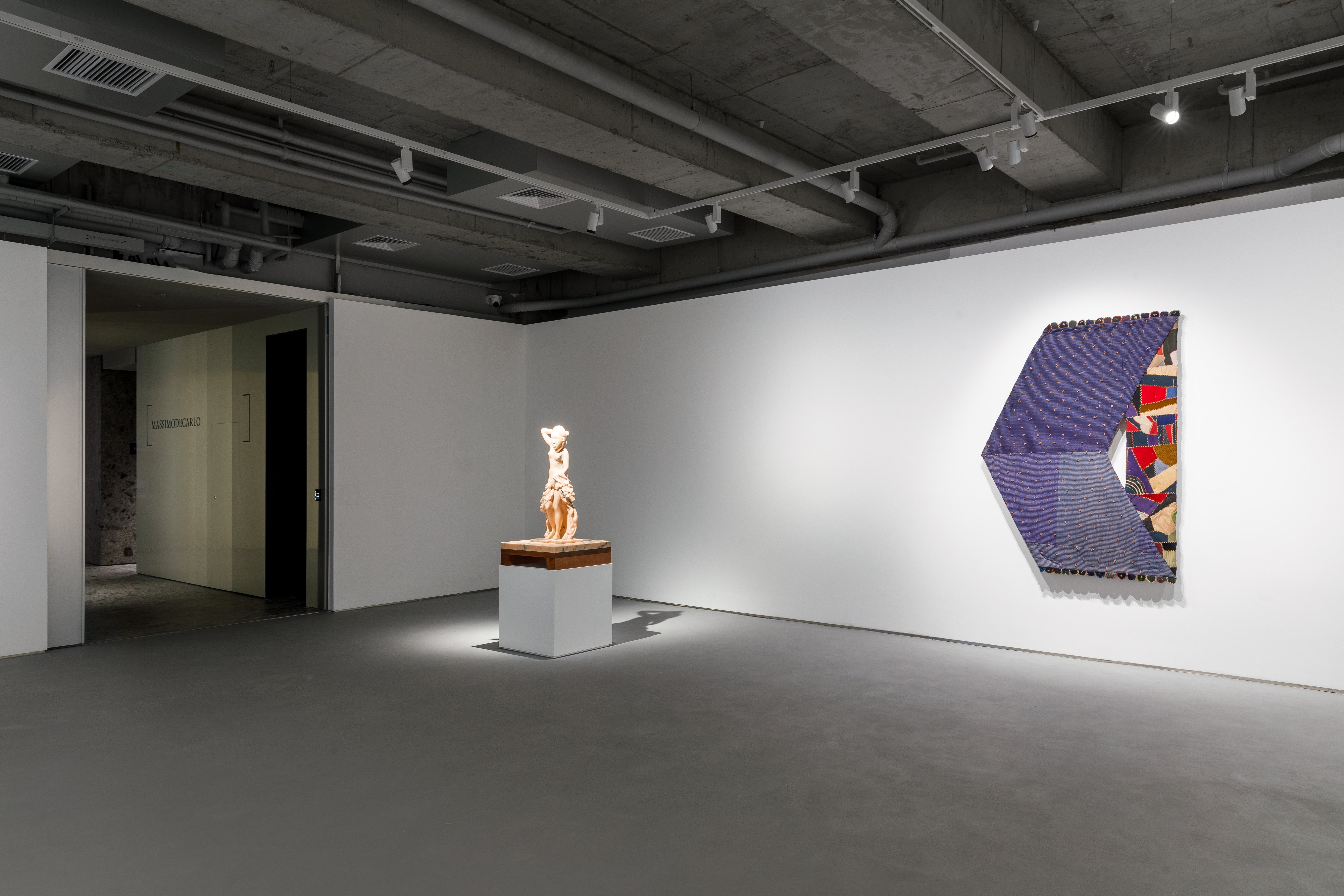 MASSIMODECARLO is pleased to inaugurate its new gallery space in Beijing with Sanford Biggers by Sanford Biggers. Sanford Biggers is the artist’s fifth exhibition with the gallery, presenting a survey of iconic bodies of work, including quilt-base artworks from the Codex series, Chimera figurative marble sculptures, Shimmer sequin installations and the BAM series.

The exhibition travels across history and place, compressing time and geography by drawing together disparate aesthetics, humanities, and concepts. Through a wide range of materials, each artwork questions the nature of authenticity, authority and origin. The works in the various series are created by patchworking multiple opposing elements to create a new singular object, placing the original source material within a trans-generational and transnational dialogue.

The Codex series includes mixed-media paintings and sculptures that repurpose antique handcrafted quilts as the foundation of the work. This process, like linguistic code-switching, recognizes language plurality, as the quilts signal their original creator as well as the new layers of meaning given to them through Biggers’ artistic intervention. Rumored to have been used as wayfinding on the Underground Railroad, quilts were encoded with symbolic messages and hung at strategic points to direct people towards freedom. Subsequently, the Codex quilts are encoded by ‘patchworking’ multiple textiles, symbols, and patterns before the artist applies painterly gestures and markings on the surface. This process draws together a range of makers as well as meanings and codes; the quilts are collaborative works between the artist and their original creators, whose physical gestures are memorialized in the quilt’s hand-stitching, while the patina left by bodies over many years of use creates unique surface textures.

Directing, guiding and shifting perspectives are also integral to the Codex series. Included in Sanford Biggers are three quilt-based artworks; Prism, The Surveyor (Bruce’s Beach), and Master Key. Prism’s inherent shape functions as a large arrow that denotes itself as a sign or a direction leading the viewer to navigate the exhibition and the other artworks in the space.

Prism points towards The Surveyor (Bruce’s Beach), which is made in part from the same antique quilt alluding to a connection between the two distinct works. The artwork’s title references a several generation’s long discrimanatory land dispute over a property known as ‘Bruce’s Beach’. When viewed in profile, the form of a figure’s silhouette emerges, but as one shifts perspective to an aerial point of view, the pattern of the three distinct textiles presents a landscape divided into land, sky and water. Within Biggers’ work the iconography of water relates to oceans and bodies of water, which dictate journeys, both figuratively and physically, by presenting challenges and changes of directions with the turning of the tides.

The third Codex artwork in the exhibition is Master Key, a seminal example of Biggers’ three-dimensional quilt objects.  Like Prism and The Surveyor, Master Key’s plays with perspective; however in this sculptural composition, the plane transposes from two-dimensional to three-dimensional depending on one’s position, inviting the viewer to physically and conceptually navigate various points of time and space to discern the piece. The Surveyor  (Bruce’s Beach), Prism, and Master Key reveal the lexicon of layered histories and symbols that explore an expansive array of visual references, connecting disparate peoples, regions and times as they unravel from the past to the present and beyond.

Though starkly opposed in their choice of materials, the quilt works of the Codex series and the marble Chimera sculptures both conceptualize and materialize  history and the original source material. The Codex and Chimera works create decipherable ‘objects for a future ethnography’ in which the provenance and relationship between each disparate part of the work can be studied to gain a more nuanced view of the highly complicated cultural cominglings from antiquity to our shared present and future. The Pink Portuguese marble sculpture Andromeda represents the Chimera in this exhibition, revealing Biggers’ engagement with the foundations of figurative sculpture.

From the Shimmer series, Stand uses a combination of different materials to focus on individual subjects; the two small handmade sculptures, which Biggers refers to as ‘power objects’, are inspired by specific people, but their identity is not made plain. The sculptures become avatars of the individuals projected in their amplified sequinned shadows. The shadow runs between the two components, cast directly from the base of the figure to the wall behind, solidifying the unbreakable connection between the powers housed within the figures that are personified within their shadows. As the viewers’ own shadow mingles with the sequinned shadows, the figures within the ‘power objects’ are established as physically present alongside the viewer while implying our precarious placement between the realms of the tangible and intangible.

Biggers’ BAM (for Keith) and BAM (for Ojore) Man of War seeks to memorialize and honor victims of police violence in the U.S., pointing toward recent trangressions and elevating the stories of specific individuals to combat historical amnesia. Biggers creates these works from wooden African statues from his personal collection that are dipped and veiled with wax and then ballistically ‘resculpted’ using various firearms. Biggers then casts the remnants into bronze, a historically notable and weighty medium. Each sculpture is named and dedicated after unarmed victims who have died at the hands of law enforcement thus memorializing, venerating and honoring them. Accompanying video pieces can be accessed via a QR code in the exhibition. The videos tether between the planes of destruction and creation, the phyiscal and the metaphysical, the sacred and the profane; dualities that are recurring themes in Biggers’ artistic ouvre. 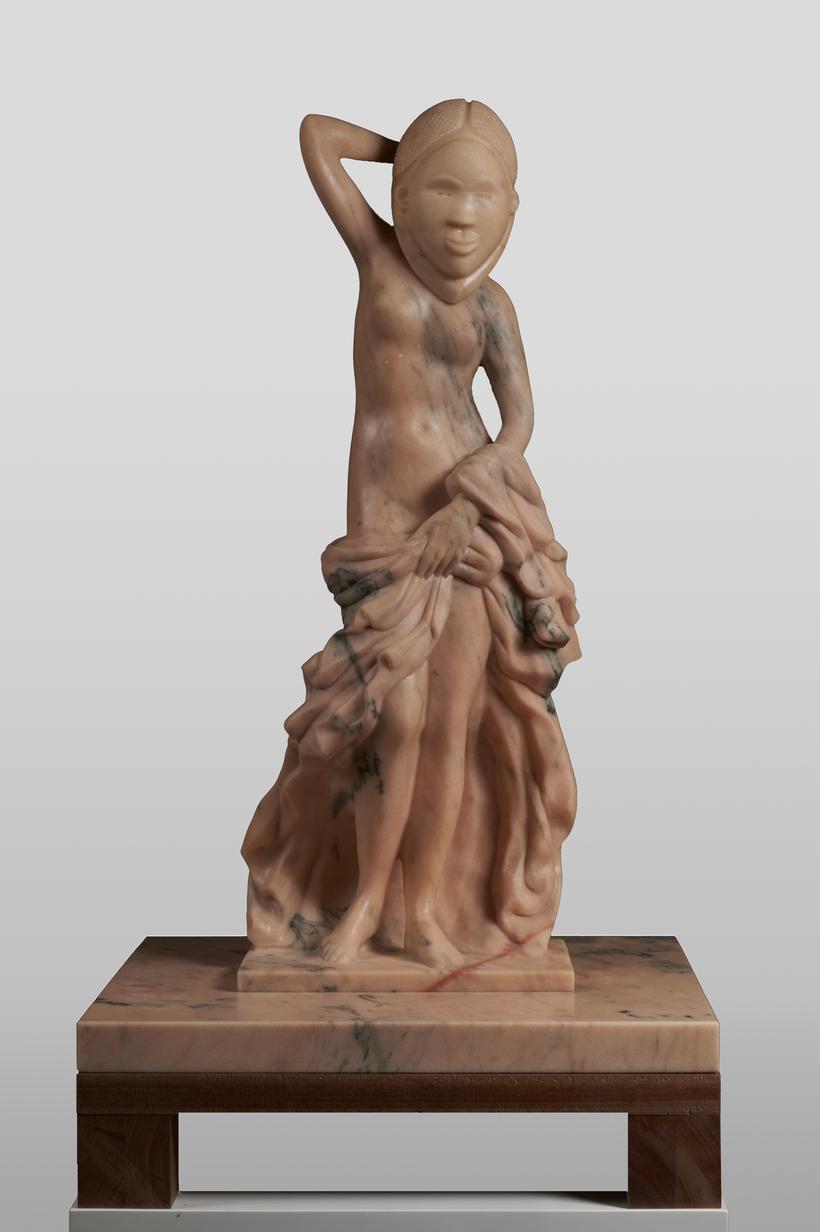 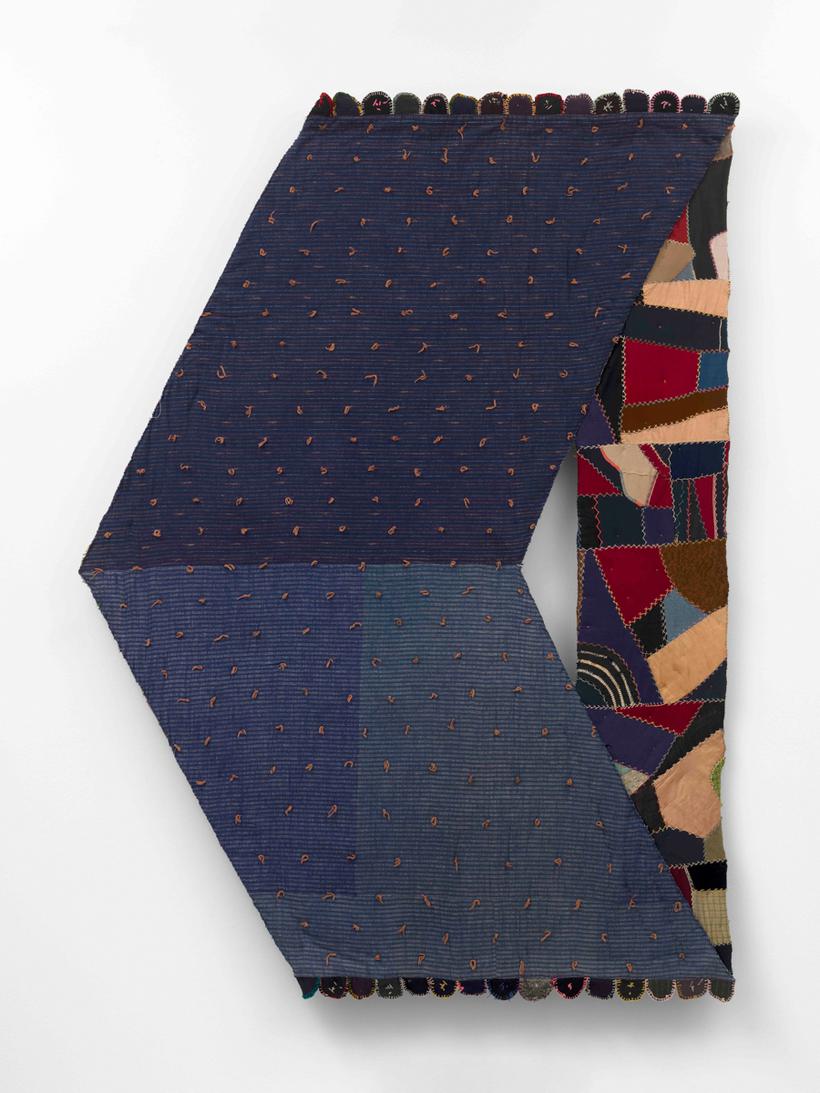 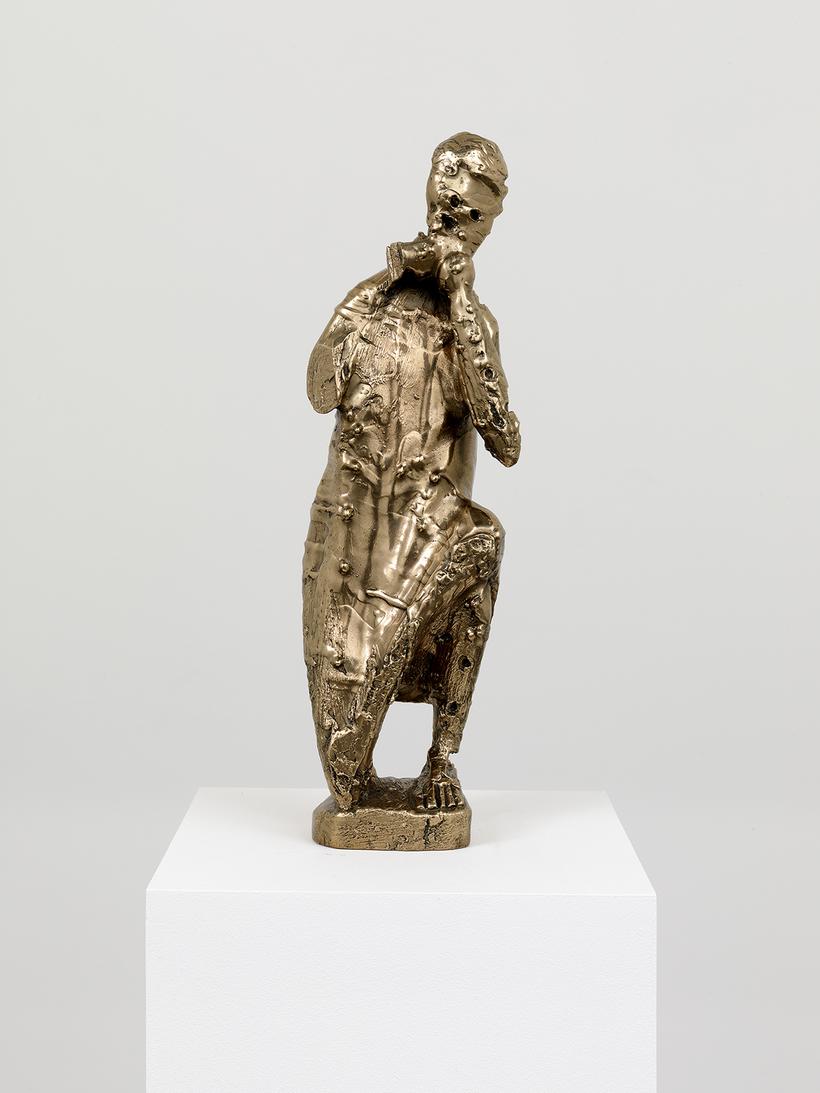 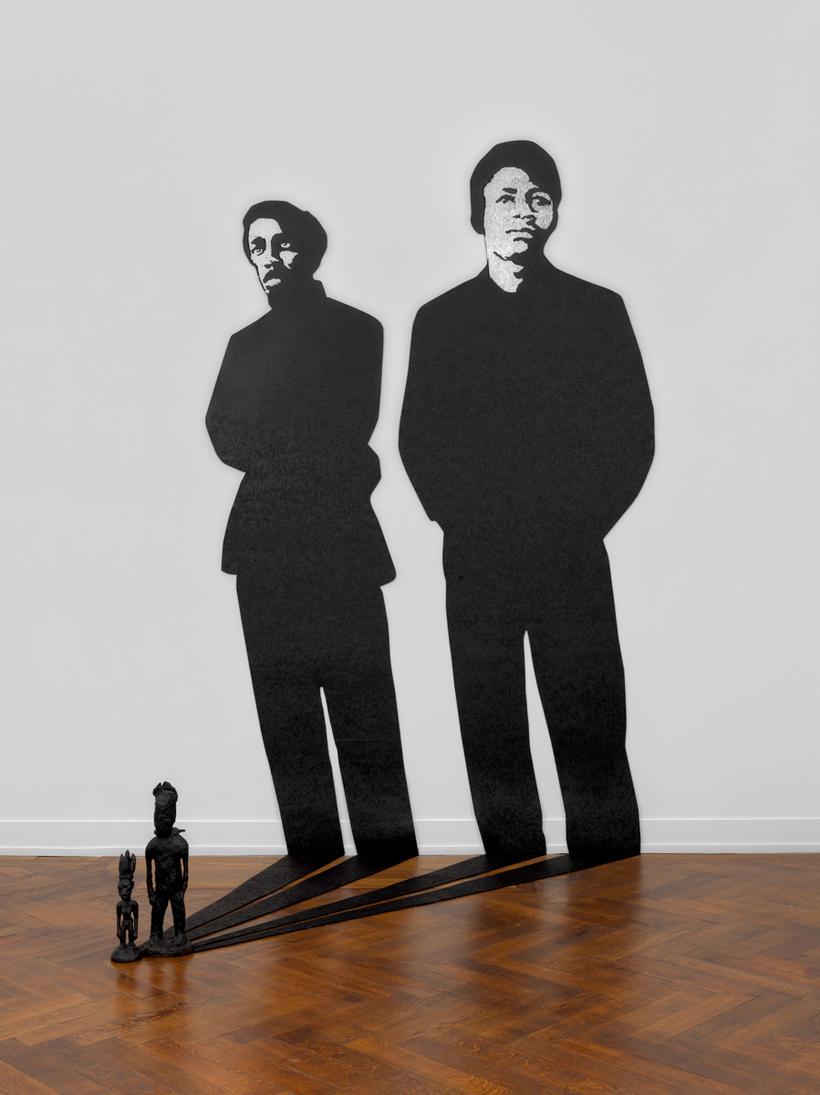 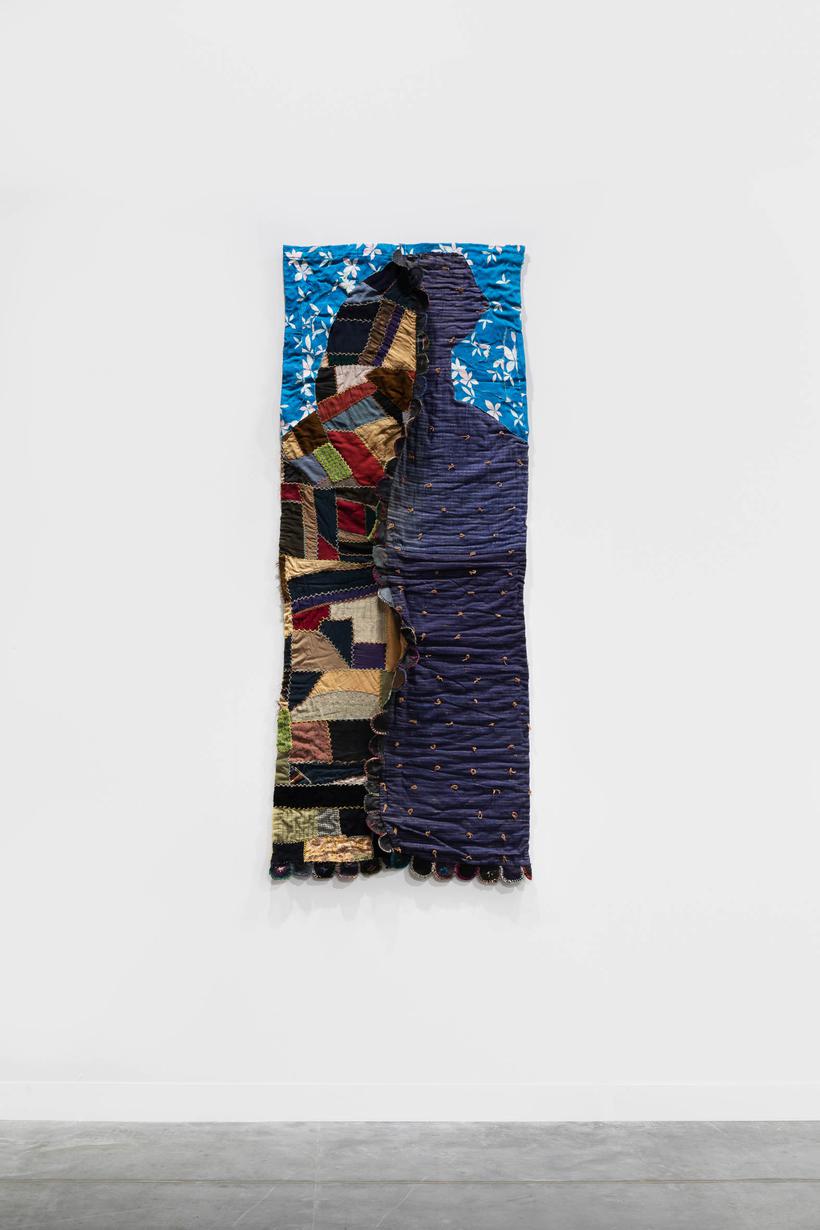 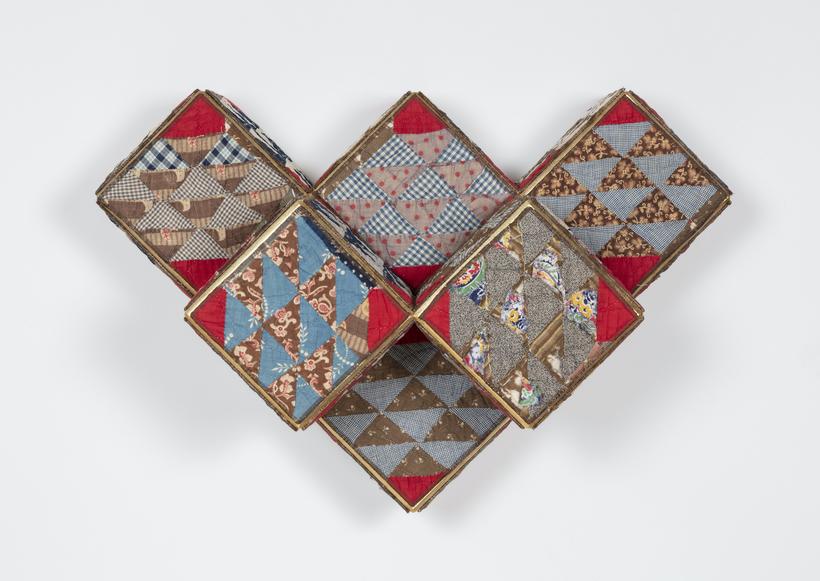